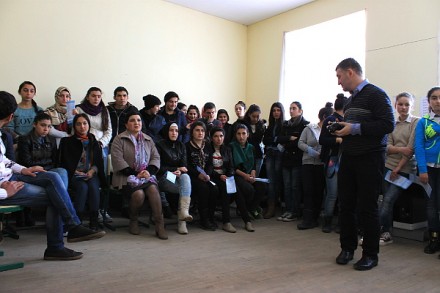 8th to 12th graders learning about gender issues at a school in Marneuli. (DF Watch.)

TBILISI, DFWatch–The Georgian parliament is to consider making it mandatory to get a court’s permission for persons of the age 16 to 18 to get married.

The bill was put forth by parliament’s judiciary committee and is based on a recommendation by the Public Defender.

According to the draft bill, which will make amendments to the Civil Code and Law about Civic Acts, persons between 16 and 18 may only get married in case of pregnancy.

Today, someone in that age group may marry if the person’s guardian or parents give permission.

If the parliament passes the bill, parents will no longer have sole authority on marriage but will need a court’s permission, and the only condition for a court to allow the marriage will be, for a girl, if she is pregnant, or for a boy, if he is about to become a father.

The explanatory note shortly describes what DF Watch witnessed in regions like Pankisi or the southeast of Georgia, that parents often allow their children to get married. Sometimes there is made a deal involving money, forcing their children to marry at an early age.

“School girls often say that if their parents force them to marry, they will kill themselves,” the note says, adding that often the marriage forces children to give up their education.

According to the Ministry of Education, 7,367 girls dropped out of school from October 2011 to January 2013.