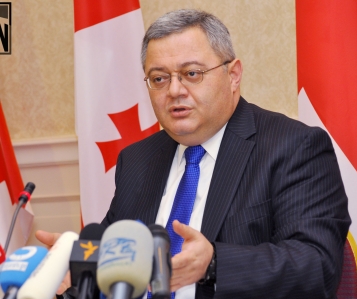 Speaker of Parliament Davit Usupashvili said the debate about the Ukraine resolution was one of his most difficult days in parliament.

TBILISI, DFWatch–Parliament in Georgia Wednesday passed a resolution condemning Russia’s deployment of military forces in Crimea, which it says is a threat to all of Europe.

The resolution says Georgia became a victim of Russian military aggression in the war in 2008, and that Ukraine today faces the same threat.

They also say in the resolution that Russia’s actions endangers the free choice of countries regarding integration with NATO and the EU, and asks NATO to speed up the integration process for countries that are ready.

The resolution was passed with 74 votes for and none against. 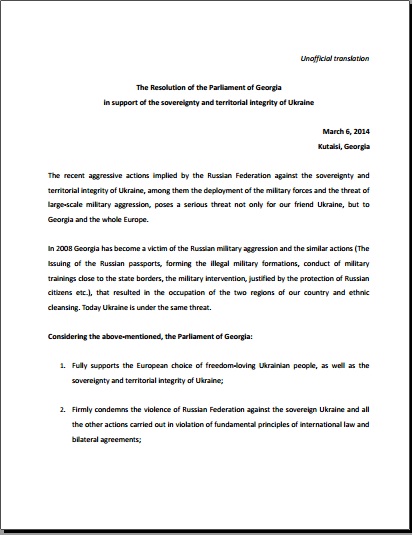 English translation of the resolution. (Click to open, PDF 49 kb.)

An alternative resolution was drafted by the party of former President Saakashvili, the National Movement, but it failed to garner enough votes – only 27 MPs voted for it, and six against.

The main difference between the two drafts was that the National Movement wanted stronger words of condemnation and called on the international community, first of all the United States and the European Union, to impose sanctions on Russia.

The National Movement, who now are in minority, did not participate when the Georgian Dream’s resolution was passed. They failed to reach agreement with the ruling coalition after days of discussions.

More specifically, the resolution says Russia’s aggressive actions, including using military units on Ukraine’s territory through violating bilateral agreement and threat of large-scale military aggression, against Ukraine’s sovereignty and territorial integrity creates a serious threat not only to Ukraine, but also to Georgia and all of Europe.

Parliament expresses its support for the European choice of the Ukrainian people and for Ukraine’s sovereignty and territorial integrity.

Lawmakers further asks the government of Georgia to actively participate in peaceful, observation and humanitarian missions to Ukraine planned by the UN, OSCE, EU, Council of Europe and other organizations.

And they call on Russia to withdraw its military units from Ukraine and stop all actions against the statehood of Ukraine.

Parliament also calls on the international community to take measures to help the Ukrainian people protect them from Russian aggression, avoid armed conflict and end the occupation of Georgia.

Parliament calls on EU and NATO to accelerate the process of integrating countries, including Georgia, which are ready for it, and says the free choice of these countries is in under threat.

Before the final vote, parliament had been having unconstructive discussion that detracted focus from Ukraine, according to Speaker of Parliament Davit Usupashvili.

After the session he said that it had been one of the most difficult days for him at parliament.

“I am not proud today that I am MP,” he said, adding that during the discussion of the issue of Ukraine, MPs spoke about everything else except Ukraine.

“Let’s for a minute look at ourselves from the view of ordinary Ukrainian citizen – imagine Ukrainian citizen listening to us to whom we say that for two or three days we try to work in order to adopt a resolution by which we will help you,” he continued.

“It doesn’t need much thinking to guess what this person might have thought after looking at us.”