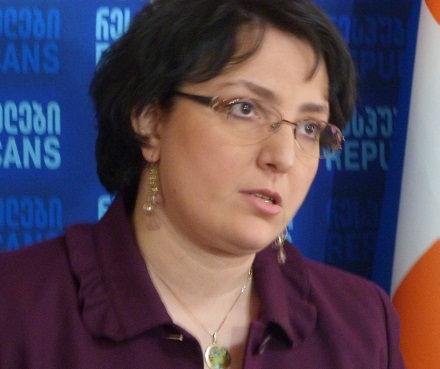 Tina Khidasheli from the Republican Party says a new set of charges against the Georgian Dream coalition will effectively bar it from this election campaign.

Tina Khidasheli, one of the Georgian Dream coalition leaders, says if their bank accounts are seized, it will mean they will have to stop campaigning.

The Chamber of Control has designated the constituent parties in the Georgian Dream coalition as law offenders and started an administrative case against them in Tbilisi City Court.

The CoC writes in a statement that Management Service Ltd has at its own expense rented and refurbished offices used by Georgian Dream in different parts of Georgia. The value of these services is about USD 300 000, which has benefited Georgian Dream as well as its constituent parties, the Republican Party, National Forum, Our Georgia – Free Democrats, Georgian Dream – Democratic Georgia, the Conservative Party and Industry will Save Georgia.

According to the CoC, making these office spaces available was done for free, and in Georgian legislation, this is considered illegal donations, which may be fined by an amount five times that of the donation itself.

Until the fine has been issued, the parties can return the service back. Now the leaders of these parties say they are not going to return money back to Management Service because the Chamber’s claim is groundless and not backed up by evidence.

A little over a week ago, the Tbilisi court issed a USD 45 million fine to Georgian Dream’s unofficial leader Bidzina Ivanishvili based on the same accusation. This case is not yet finished, but among the Georgian Dream leadership it is assumed that the court will rule the same way, despite not having any evidence.

The court has 48 hour to reach a decision after the CoC has lodged a suit. Then there is a 48 hour window to appeal the decision; and then a 48 hour window for Appeals Court to decide the appeal.

“Of course, we have the position that there was no benefit from services provided by Management Service to equip and refurbish offices. It was done with a profit margin. We have an audit statement too, but the Chamber of Control doesn’t want to hear about it,” says Georgian Dream lawyer Archil Kbilashvili.

He adds that the court is expected to issue a fine for Georgian Dream coalition parties for 2 383 070 lari. If they don’t pay the fine, their bank accounts will be seized.

Kbilashvili doesn’t exclude that the parties may be thrown out of their own offices and their property sold at an auction, if they don’t pay the fine.

Tina Khidasheli, who is one of the leader of the Republican Party, says that the Chamber’s decision will lead to the seizure of the bank accounts of the only alternative to the current government, which means prohibiting Georgian Dream from taking part in the election process, because with seized accounts, the party won’t be able to continue its election campaign.

“I wonder if they thought about what the political results might be when they committed this illegality,” she adds.