Georgian opposition: Zero tax for those with low income

Georgian opposition: Zero tax for those with low income 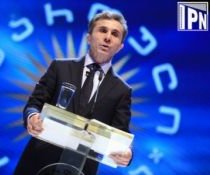 Bidzina Ivanishvili will exempt from income tax everyone with less income than the minimum wage. Georgia today has a flat tax rate of 20 %. (Photo: Interpressnews.)

TBILISI, DFWatch – Saturday, the opposition party everybody expects to challenge Mikheil Saakashvili in October’s parliamentary election gathered for a founding congress in Tbilisi.

Another promise was to exempt lower-income groups from income tax altogether. He said he would establish a tax-free minimum, so that the those who are below the minimum wage will be exempted from the 20 per cent income tax.

Georgia has flat tax, a system used by relatively few countries (26) in the world, where everybody pays the same percentage, either in absolute terms or the same marginal tax.

He further promised every citizen a basic insurance package, which will be larger than a system the government has suggested which will only cover about half the population.

Who would be at the helm of Georgian Dream had been uncertain, because Ivanishivli himself is facing a complicated legal wrangle with the regime to be allowed full political rights.

But delegates at the exhibition center Expo Georgia decided that a female lawyer, Manana Kobakhidze, will lead the new party, at least for the time being.

Because Ivanishvili isn’t a Georgian citizen, current law doesn’t allow him to get involved in political processes. The government revoked his Georgian citizenship soon after he said he wanted to be a politician. The businessman first lost a court case and later asked the president to give him Georgian citizenship through naturalization; but this has not borne fruit yet.

A constitutional amendment will soon allow EU citizens to get involved in Georgian politics. After this procedure is completed, Ivanishivli will have a right to participate in the elections and become leader of a political party.

“The Government thinks that refusing to give Georgian citizenship to Ivanishvili and granting other ways to participate in elections is diminishing his rights, but the opposite happened – Ivanishvili was granted even more superior rights. He will remain a French citizen and at the same time has all rights to participate in Georgia’s elections,” Kbilashvili said.

In the meantime, Manana Kobakhidze will be the leader of Ivansihvili’s party Georgian Dream Democratic Georgia. She has passed attorney qualification exam ans is a member of Georgian Lawyer’s Association. She also passed judge qualification exam; is a lecturer at the Caucasus University School of Law; and has worked in non-governmental organizations for years.

“Georgian Dream Democratic Georgia will unite the whole Georgia in one fist in October. Together we will make our Georgian Dream come true,” Kobakhidze said.

Delegates approved the symbol, rules and congress declaration for the party, and then Ivanisvhili spoke, introducing them to the wider society.

He spoke about priorities, which the new party has.

According to the declaration, the party supports Georgia’s European and Euro Atlantic integration.

“The party will support the strengthening of opposition forces within the frames of the Political Coalition Georgian Dream and have intensive cooperation with other political forces which share the views declared in the coalition’s founding declaration.”

Ivanishvili noted that it is important for Georgia to normalize relations with Russia.

“It’s no less important to develop regional cooperation and normalizing relations with Russia. Georgia should become a reliable partner for the international community,” he said, adding that the development of military forces should be grounded on the basic principles and requirements of NATO integration.

He also said a proposal made by the Georgian Patriarch needs more attention and support. It deals with transferring church lands for free for motivated and organized industry.

“Let’s together make our Georgian Dream Come true. Together we will win,” he ended his speech.

The document says that human rights are violated in every area, the army is politicized, and so it the police, the prosecutor’s office and other controlling bodies.

“Frequent amendments of the constitution and legislation, in order to retain powers, is beyond all legal and moral norms. The government didn’t manage to prevent military aggression against the country, also the effective resistance to it, which resulted in significant human suffering, moral and material loss – territorial occupation,” the declaration says.

The document also focuses on the country’s stability and issues with democratic development, agriculture, right of property, and education.

When the congress was over, youth took Georgian flags in the hall and sang a famous Georgian folk song, Mravalzhamier.

Ivanishvili set up his political coalition in February. The Free Democrats, the Republican Party, the National Forum, the Conservative party and the People’s Party joined together with the Industrialist party. They also attended the founding congress of the new party.

Republicans leader Davit Usupashvili said that honorable people were elected for the political board of the party.

“We are one big team and together we will be able to change the government through elections,” he said.