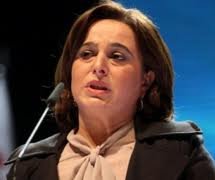 Lawyer Manana Kobakhidze will be chairwoman of the opposition Georgian Dream party until a constitutional amendment is passed and enforced which allows billionaire Bidzina Ivanishvili to take over. (Photo: Interpressnews.)

As there is less than six months left until the parliamentary elections, billionaire Bidzina Ivanishvili today formally established his Georgian Dream party.

Due to a technicality, he can not be leader himself. Instead, delegates elected lawyer Manada Kobakhidze as a temporary chairwoman, until a recently proposed constititional amendment allows Mr Ivanishvili to be engaged in party politics.

The businessman was robbed of his Georgian citizenship shortly after becoming a politician last year, but the amendment will let him participate and stand for election by way of his French citizenship.