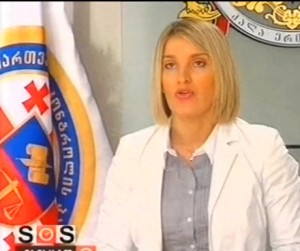 Natia Mogeladze, head of the financial monitoring group of the Chamber of Control, today announced that a political donation was an instance of illegal funnelling through an individual, because the person has a too low income to explain such a big donation. (Photo: Maestro TV.)

TBILISI, DFWatch – Georgian authorities have issued fines to an opposition figurehead and his associates totaling 363 000 US dollars.

The businessman Bidzina Ivanishvili, who since October 2011 has been gradually building a base within the country’s politics, was targeted by the party financing authority early this month, because of a money transfer to his party (temporarily called a movement).

Authorities claim the transfer was misleading and in violation of new rules ushered in last December.

Today it was announced that the Ivanishvili owned company Kartu Mshenebeli, one of its employees, as well as Ivanishvili’s movement Georgian Dream will be fined with 200 000 Georgian lari each.

The new party financing rules empowered the Chamber of Control to determine whether a person or organization is directly or indirectly connected to a political party, and without any evidence, apply sanctions.

Today, Natia Mogeladze, head of the Chamber of Control’s financial monitoring group, explained that the chamber has investigated the case regarding Kartu Mshenebeli, its employee Nugzar Khutsishvili, and Ivanishvili’s movement Georgian Dream.

The conclusion was, she says, that they were faced with an illegal donation from a legal person through an individual person, which is prohibited by the new amendments to the law about political unions of citizens.

Nugzar Khutsishvili received 40 000 lari as premium from Kartu Mshenebeli, the Chamber says. He has a salary of 12 000 laris a year in this company.

Three days after the award money was transferred to his account, Khutsishvili transferred 20 000 lari to the account of the Georgian Dream.

Mogeladze says that the amount of the award is totally inconsistent with the performance of his work and his salary level, which proves that this was an instance of illegal financing by a legal person, made through an individual person.

The Chamber of Control last week warned Georgian Dream that it must transfer the money back to the donor. This did not happen, thus the Chamber fined them ten times the donation – 200 000 lari. The money received from Nugzar Khutsishvili has been acquired by the government, in accordance with the law.

Recently, local rights groups and media representatives started a campaign called “This affects you too” to raise awareness about these new party financing rules and put pressure on the government to change them. They say the rules threaten the freedom of speech, property rights, rights to political activity and democracy.