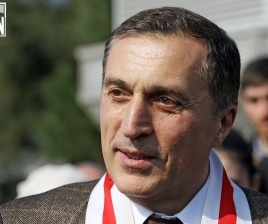 TBILISI, DFWatch–As the presidential election in October is drawing nearer, Georgians are discussing candidates and who their next president might be.

The Georgian Dream coalition has already decided on Education Minister Giorgi Margvelashvili as their candidate, while the National Movement is in the midst of a series of primaries to select a candidate.

But also individual candidates will try to run. Recently, there was talk that opera singer Paata Burchuladze would also throw his hat into the ring. After more than a month of rumors, the singer on Monday responded saying that he doesn’t plan to go into politics.

He explained that in last few days, there have been phone calls nonstop from the media and from people asking the same question.

“I want to once again confirm that for years I have received proposals to get engaged in political processes, but I always used to refuse them and I never regretted,” he said. “I think there is no necessity for me to go into politics.”

Burchuladze says he thinks he is more needed in civic activity and he will continue what he always did.

“But if someday we all together will think that country needs me in some other field and my experience is needed there, I promise that I will be ready to take this step,” he added.

Burchuladze is an operatic bass and a winner of several musical awards. He is also well-known philanthropist, who founded the charity fund Iavnana. A week ago he celebrated 35 years on stage.