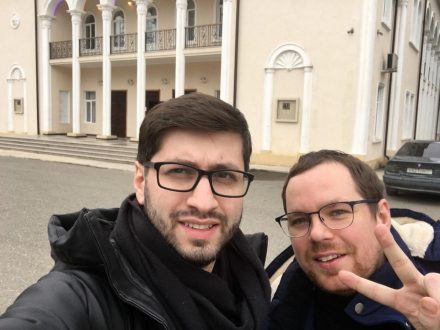 GALI, DFWatch–Georgian opera singer Giorgi Todua will hold a concert in the breakaway region Abkhazia on Wednesday, for the first time after the bloody war in 1991-92, which killed tens and  displaced hundreds of thousands of people.

The concert will be held in the culture center in Gali.

Todua, a baritone and soloist at the young talent academy at world famous Mariinsky Theatre in St Petersburg, says all seats have already been reserved.

“As I learned, free places are not already in the Culture House,” Giorgi Todua told DFWatch, adding that he is bearing all expenses himself because of the locals’ dire economic condition and decided to offer free admittance.

The concert is dedicated to the memory of Giorgi’s late father who died in 2010 at the age of 42 and was buried in Gali, his hometown, in accordance with his last will.

“His dream was to return to Abkhazia… also he dreamed of us holding a performance here,” Giorgi’s sister Teona Todua said. “Unfortunately, I can’t come but Giorgi will [come] and hold a concert by the name “Dad, We Came Back.”

Giorgi says that he has wanted to hold a performance in Gali, but refrained as he didn’t want to have a text mentioning “Republic of Abkhazia” on the poster. When this problem was overcome, he immediately scheduled the concert.

“This was one of the main reasons why I did not perform a concert. Now the obstacle is overcome and I agreed. The text written on the poster reads “Mariinsky Theater soloist Giorgi Todua, pianist Alexander Tikhomirov. The Gali District Culture House” and there is no reference to the Republic, “- Giorgi Todua said.

Giorgi, 30, was born in Rustavi, near Tbilisi but raised in Gali where he lived with his family. After the Abkhazian war, the family relocated to St Petersburg. He then returned to Georgia for a while and studied under Nodar Andghuladze at Vano Sarajishvili Conservatory in Tbilisi. However, soon he returned to St Petersburg where he enrolled at the Young Talents Academy of the Mariinsky Theater where he remains until now.