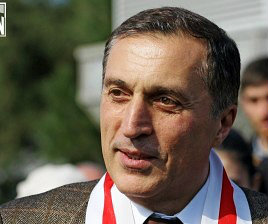 TBILISI, DFWatch–Paata Burchuladze, a Georgian opera singer who formed a political coalition which participated in the October 8 election, announced his departure from politics on Wednesday.

Local media outlets wrote that the new leader of the party will be historian Nika Machutadze.

Interpressnews reported that Burchuladze plans to return to his international career as an opera singer.

His party State for People met for a party congress on Wednesday, and it was during this assembly Burchuladze’s decision became known.

State for People was started in May. Since then, several political groups aligned with his party, including groups formed by dissenters from the National Movement, Girchi and Akhali Sakartvelo (New Georgia).

Despite an apparent surge in popularity, State for People did not succeed in surpassing the 5 percent threshold for getting seats in parliament. Burchuladze expelled Girchi from his coalition right before the elections.