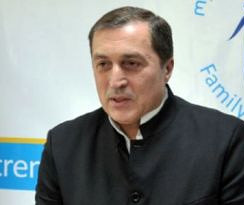 TBILISI, DFWatch–A famous Georgian opera singer and philanthropist is considering going into politics as less than a year remains until the parliamentary election.

Paata Burchuladze, a world-renowned operatic bass and in Georgia also known for his charity foundation Iavnana (“Lullaby”), on Friday announced that he has cancelled all opera performances for the next year to develop an organization he founded last year called Georgian Development Fund, which many believe may turn into a political party.

When asked, he didn’t rule out that he may launch a political career.

“I never thought of becoming an opera singer, but life brought it to me, or better to say, I was given a chance and I used it,” he began. “I never wanted to be a philanthropist, but life offered me the conditions to become one.”

He said life will show him the way in the future, but at this stage he is focused on developing his new fund.

But when journalists asked him whether he plans to run for president in the future, he ruled it out as of today.

Three years ago, after the Georgian Dream coalition came to power, Burchuladze was regarded as a one of the coalition’s possible candidates for president.

He is now head of the new organization’s supervisory council. Its executive director is Vano Machavariani, who used to be foreign affairs advisor to the president.

Many believe that the new organization may be turned into a party before the parliamentary election in fall of 2016.