Georgian Olympic athlete let down due to opposition sympathies

Georgian Olympic athlete let down due to opposition sympathies 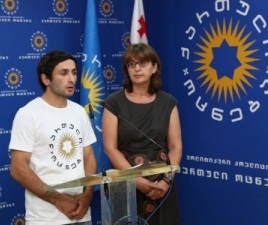 Betkil Shukvani (left) lost a judo match and says the Georgian Olympic team didn't back him up after an unfair decision by the referee. He says all athletes are divided in pro-government and pro-opposition camps now. Georgian Dream spokesperson Maia Panjikidze to his right. (IPN.)

TBILISI, DFWatch – A Georgian athlete says he might have been subject to political harassment at the London Olympics.

July 28, the Georgian sportsman Betkil Shukvani lost against an Australian in a judo match and then unexpectedly left the Olympics and returned to Georgia.

The sportsman said at a press conference organized by Georgian Dream Thursday that July 22, before leaving for the UK, he met with Bidzina Ivanishvili, leader of Georgian Dream coalition, took pictures with him and expressed support for him.

“A decision was already made that I was going to the Olympics, so they couldn’t change anything and take another person instead,” he said, adding that information was spread about his meeting with the coalition leader.

Members of the Georgian Olympic team verbally abused him at the airport. On the plane he was told not to support Bidzina Ivanishvili.

The sportsman says he was in good shape physically.

“I have been in sports for 12 years and I don’t remember such a judge,” he says, recalling his second match at the Olympics.

Shukvani appealed to the Georgian delegation to react to the judge’s unfair action, but the sports minister didn’t respond.

Afterwards, one member of the Georgian delegation, Ghia Udesiani, expressed a desire to meet him, but he was drunk. The sportsman says he felt threatened, jumped out of the window and left the place. He asked a friend in Croatia for help with getting a ticket home and went back to Georgia.

“This incident is a classic example that sportsmen in this country are separated in government and Georgian Dream supporters, and the government is artificially making this confrontation in sport,” said Georgian Dream spokesperson Maia Panjikidze today.

Georgia’s sports ministry said in a written statement that the accusations are groundless.

The ministry writes that those members of the Georgian delegation who were sent from the ministry were invited there as guests and have no authority to interrupt or protest the decisions of a judge.

The ministry called on the sportsman and the Georgian Dream coalition to separate sports and political life and not to use it to score political points.

Georgian Dream plans to hire a lawyer for the sportsman and find out what happened.