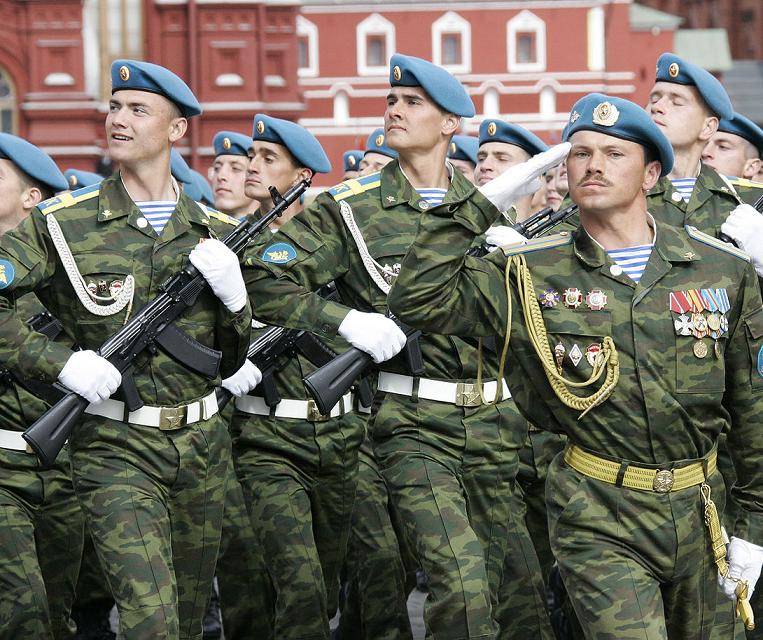 The Russian exercise Kavkaz 2012 will also include paratroopers, here seen in a parade in 2005.

TBILISI, DFWatch – A top Georgian security official warns that there could be another war with Russia.

Russia and Georgia fought a brief war in August 2008 over two breakaway republics. Now the secretary of Georgia’s National Security Council warns that an unprecedented military exercise Russia is planning in September could be the prelude to another war.

Russia regularly holds exercises in the North Caucasus, but this year’s Kavkaz 2012 will for the first time take place in Abkhazia and South Ossetia, two breakaway republics currently occupied by Russia, as well as at a Russian military base inside Armenia.

Georgia has informed international organizations about the plans, and considers it a source of concern that the exercise is planned for September, just one month before the parliamentary elections in Georgia.

“It won’t be coincidental if our neighbor decides to start a large military exercise in the second part of September, a few days before the election. Aside from this, it will use all possible means to discredit these elections, frighten Georgians through the use of force on one hand, and on the other hand buy Georgian voters by the money flow from that country,” Georgian president Mikheil Saakashvili said while meeting with a delegation from the European People’s Party.

Giga Bokeria, Secretary of the National Security Council of Georgia, considers Kavkaz 2012 concerning in regards of time scale, goals, preparing a reaction for the Iran problem and the fact that the exercise is to be held at Russian military bases in Georgia’s occupied regions. He said in an interview with Ekho Moskvy that he hopes that the international situation and other conditions will prevent this potential decision from being implemented.

The Georgian official doesn’t exclude the possibility of another war between Russia and Georgia. He says there is desire in Russia to finish what started in 2008.

Georgia follows the direction which was the reason for the Russian aggression in 2008, he says, which is a reference to Georgia’s aspirations to be a member of NATO and the EU. Until there is such a desire and a policy to implement this desire, there will always be a problem with the Russian government, which means that this kind of danger shouldn’t be excluded, Bokeria told Ekho Moskvy, an independent Russian radio network.

“The main threat from a Georgian perspective remains Russian military threat because militarization and deepening military infrastructure on Georgian territory continues because a military exercise is going to be held in autumn,” Bokeria said.

According to the Georgian Foreign Affair Ministry, Russia responded to Georgia’s concern about the military exercise.

“The Russian side responded to the concerns raised by the Georgian participants on the military drill ‘Kavkaz 2012’ with the assurance that the exercise will be command-and-staff drill and not include the Russian troops deployed outside of the territory of Russia,” a statement released by the Foreign Ministry during the 19th round of the Geneva talks says,

“‘The Georgian side will wait for this statement to be officially confirmed by the relevant authorities of the Russian Federation and be substantiated by the actual facts on the ground before making further official assessments.”