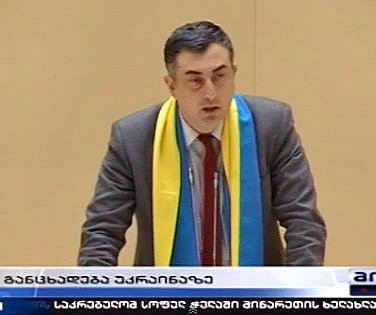 They did it to express solidarity with the Ukrainian people. The speaker of parliament liked the idea and asked to give him one too.

MP Petre Tsiskarishvili said they know what the choice of the Ukrainian people is and that the government is under pressure.

“We want them to choose to become members of the European family. The pressure from Russia is great,” he said.

MPs from the National Movement, who believe Yanokovich’s decision was result of pressure, think there also will be exerted pressure on Georgia in the period after initialization and before final signing. They think Ukraine has been put in a difficult situation due to sheer blackmail.

“Ukraine had already initialized the agreement and got into the situation that it is in now.”

Speaker of Parliament Davit Usupashvili liked the National Movement’s idea to express support for Ukraine and asked for a Ukrainian flag. They gave him a flag for his desk.

A few days ago, the UNM proposed a draft statement to express support for Ukraine and the Ukrainian people, but the parliamentary majority did not support their initiative on Wednesday. 18 MPs voted for and 31 against it. The statement expressed support for the Ukrainian people, its sovereignty and for a foreign policy which is compatible with the country’s real interests.

The statement says Ukraine refused to sign the Association Agreement with the EU as a result of Russia’s political pressure and economic harassment.

MPs from the Georgian Dream coalition didn’t like the text of the statement and said it contained aggression towards Russia and this may have undesirable results for the country.