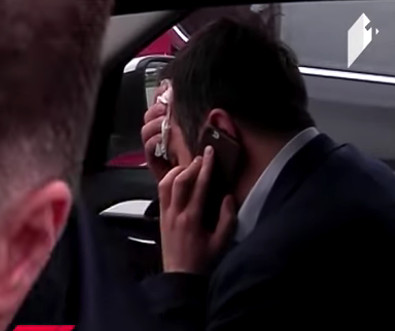 TBILISI, DFWatch–A member of the Georgian parliament was lightly injured on Wednesday, after a verbal and physical confrontation that led to an ashtray being hurled at his face.

Otar Kakhidze was accidentally hit by an ashtray during a confrontation between two other MPs inside one of the MPs’ offices.

Giorgi Kandelaki, a member of European Georgia, threw an ashtray towards Vano Zardiashvili, a Georgian Dream member, but missed. Instead, he hit Kakhidze, who was a bystander to the quarrel.

Kakhidze, who is in the same party as Kandelaki, was filmed by the Georgian Public Broadcaster’s Channel 1 leaving the parliament building in Kutaisi Wednesday afternoon, accompanied by his fellow party member Giorgi Tughushi.

This ashtray hurling incident was preceded by loud shouting between members of two opposition parties in the main hall of parliament, during a debate about whether a planned address by the head of the State Security Service should be open or closed to the public.

“It doesn’t matter will the session be open or closed when that foreign spy Giga Bokeria is sitting here,” Kvitsiani said.

This remark was derided by members of European Georgia, whose noisy reaction provoked Kvitsiani’s indignation. He took off his jacket, splashed water towards and rushed to the corner of EG MPs, but was timely stopped by parliament’s security personnel.

European Georgia was formed when members of United National Movement who broke away from the party in a bitter feud over the role of leader Mikheil Saakashvili after the 2016 parliamentary elections.

Kvitsiani has a background as a former warlord in Kodori Gorge in the northwest of the country. Kodori was the only part of Abkhazia that remained under Tbilisi’s control prior to the 2008 August War. He displayed disobedience to the central authorities, which led to a special operation by the army and interior ministry troops in the Kodori Gorge in 2006. Kvitisiani escaped to Russia, from where he returned in 2014, and was arrested upon arrival at Tbilisi airport.

Kvitsiani was put on trial and found guilty of sedition and forming an illegal armed militia. The court sentenced him to 12 years in jail, but he was released in 2015 after the prosecution struck a deal. Since then he has been a member of conservative Alliance of Patriots.