Georgian MP fined for wearing pistol at rally against extremism

Georgian MP fined for wearing pistol at rally against extremism 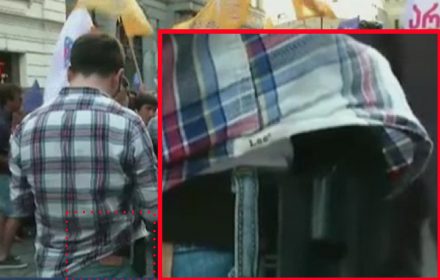 Otar Kakhidze appeared with a pistol in his belt during a recent rally against extremism.

TBILISI, DFWatch–A Georgian opposition member of parliament was fined 200 USD on Wednesday for demonstratively wearing a pistol in his belt during a rally against far right extremists.

Otar Kakhidze, a lawyer who represents European Georgia in the national assembly, was fined 500 laris (USD 208) and given a one-month ban on wearing a gun outdoors.

Kakhidze said he would comply with the judge’s ruling, which he referred to as ‘fair and legitimate’.

Earlier, after videos emerged about him wearing a gun, Kakhidze conceded that it was his mistake but he wanted only to protect himself.

Kakhidze’s European Georgia held a rally on Sunday to protest against what they call ‘Russian fascism in Georgia’.

It was conceived as a counter-rally to the one held a week earlier by ultra-nationalists who demanded stricter immigration rules, kicking out illegal immigrants from the country, banning the financing of NGOs from abroad and prohibiting United National Movement and its spin-offs.

European Georgia, which consists mainly of former UNM members, was one of the ultra-nationalists’ primary targets.

Their gathering on July 14 was viewed by many as either directly orchestrated by the Kremlin or serving its interests.

During the EG rally, which was supported by some other minor pro-western political groups, ultra-nationalists gathered on the side of the street and bombarded the participants with eggs, plastic bottles, brooms and other objects. However, hundreds of police officers amassed on the spot and managed to prevent serious clashes.