Georgian media to be scrutinized ahead of important election

Georgian media to be scrutinized ahead of important election 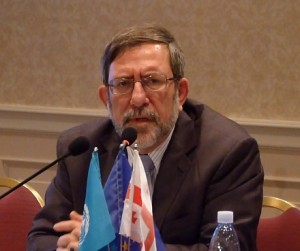 TBILISI, DFWatch – The European Union and United Nations Development Program is starting a new round of media monitoring in Georgia for the upcoming parliamentary and presidential elections in 2012 and 2013.

All kinds of media outlets will be monitored, including TV, radio, online and print media, Jamie McGoldrick, UNDP Resident Representative in Georgia said today at a meeting in Tbilisi Marriott Hotel.

“Media monitoring enhances the links between the media and society, and helps the public make informed decisions. If media can shape a society, then credible and unbiased monitoring can shape the media.”

Philip Dimitrov, Head of the EU Delegation to Georgia spoke about the important role of the media during an election period.

“In elections there always are winners and losers by definition, which means electoral culture should be enhanced in direction to help people plead fear, so that winning and losing make sense and of course be ready to accept the results, which is the seal that makes democracy work,’ He said, ‘it is very difficult to achieve if you do not have the feeling, perception that people are well informed, people are well accessed, there is no voice hush down, there is no opportunity take it away from those who want to express their positions.”

The new media monitoring will start next week and the first results will be made known in June. The goal of the project is to create a transparent, objective and balanced media environment.

“Our desire is to see Georgia democratic, Georgia prosperous and Georgia developing in the way, which we consider proper. This is why the voice of international institution represents in Georgia will be the automat signal of how things are going in the country.” Philip Dimitrov said today.

International Society for Fair Elections and Democracy (ISFED) today presented the results of the media monitoring conducted from May 30 to December 31, 2011 about election issues. The organization monitored Public Broadcaster’s Channel 1 and Channel 2, Rustavi 2, Imedi, Maestro and Kavkazia.

“The results of the monitoring showed that the TV channels pursue very different strategies for reporting about election issues. Especially big is the difference between the private and public channels. In both cases, the topic suffers from a very limited coverage. Despite important election processes which coincided with the monitoring period (amendments to the legislation concerning elections, intermediate elections in the Telavi precinct #17 etc.), this information was left beyond the attention of the TV channels,” the report says.

ISFED reports that the public channels paid less attention to reporting on election issues, but if reported, their material was more or less fact-based, balanced and objective.

As for the channels Rustavi 2 and Imedi, which cover the whole country, they allocated the least time to reporting on election issues, while Maestro and Kavkazia, which only broadcast in the capital, allocated most time to election issues.

“Our analysis of the qualitative data showed that these channels demonstrated are latively negative attitude towards the governing party. However, partial reporting was part of the personal programs and talk-shows, and was not recorded during news programs.”

Caucasus Research Resource Center will conduct monitoring for TV news within the frames of the new round of media monitoring; radio channels will be monitored by Internews Georgia, ISFED will observe print media, while Georgian Institute for Public Affairs (GIPA) will monitor online publications.

“The more proffesional media is the more protective media becomes. With Palriamentary and President Elections ahead Georgian media will be tested for maturity and professionalism and it’s another reason to continue the work towards development of the media in Georgia,” Jamie McGoldrick said at today’s meeting.