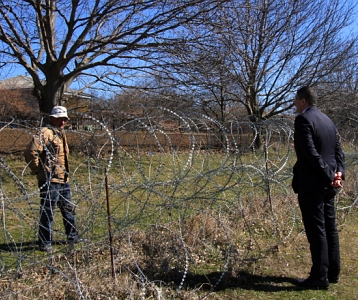 Davit Khuroshvili, 48, from Khurvaleti was detained for violating the border. Locals claim he was detained in his own garden.

New border signs and fences were installed in the village a few weeks ago. This caused a series of incidents in the area the following days.

Khuroshvili’s family say they were out working with him when it happened and that he was brought to Tskhinvali, the administrative center of the breakaway region.

Border detentions number over a hundred per year. Georgians are usually incarcerated in Tshkhinvali and released after paying a fine of about USD 60.

July 18, a few days after the border incident, Russians detained a man from the village Knolevi. He was released soon after a special meeting of the Incident Prevention and Response Mechanism.