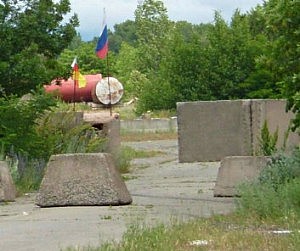 Abandoned South Ossetian checkpoint at the village of Ergneti from Georgian-controlled side (DFWatch, May, 2014)

The agency writes that according to the South Ossetian KGB (Committee for State Security), a South Ossetian man from the village of Dmenisi near Tskhinvali made a citizen’s arrest on a Georgian man who was trying to hitchhike into the republic’s capital city.

The man was reportedly born in 1974 in the city of Rustavi.

‘The inhabitant of the village of Dmenis[i] said that the citizen of Georgia stopped a passing car with an intention to arrive at the bus station in the city of Tskhinval[i]’, the KGB’s statement reads. ‘The inhabitant of South Ossetia found it out in the course of a conversation, following which he decided to take the man to the Border Service of the KGB of the Republic of South Ossetia, where the citizen of Georgia was detained.’

According to the KGB, the man crossed the border on February 13. A formal investigation has been launched.