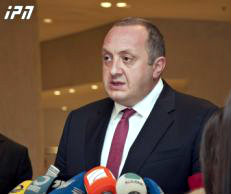 TBILISI, DFWatch–Georgia’s president and prime minister are shocked by the assassination of Russian opposition leader Boris Nemtsov in Moscow.

“I’m shocked by the assassination of Boris Nemtsov. He was a politician who fought tirelessly for the last two decades for the ideals of Democracy and Freedom. This murder is a blow to the whole progressive humanity and it should be investigated,” President Giorgi Margvelashvili wrote on his Facebook page.

Also the head of government expressed shock at the gunning down of the opposition leader close to the Kremlin Friday night.

“I’m shocked by the horrible tragedy that occurred in the center of Moscow. One of the prominent Russian politician, Boris Nemtsov, has been assassinated. I strongly condemn this appalling violence, and we hope that the perpetrators of this brutal crime will be found and punished according to the law. I share the grief of his family and friends and extend [my] condolences to the Russian people,” PM Irakli Garibashvili wrote on Facebook.

Nemtsov’s assassination was also condemned by the Foreign Affairs Ministry.

“First of all, I would like to respond to the terrible fact, the cruel slaughter, which yesterday, in Moscow, took the life of one of the opposition leader, Boris Nemtsov. We condemn this horrific attack. The investigation must be conducted transparently, quickly, adequately, and all those who are guilty of this terrible assassination, should face justice. We offer our condolences to his loved ones, family members and once again condemn these despicable acts “, MFA spokesman Davit Kereselidze said at a briefing on Saturday morning.