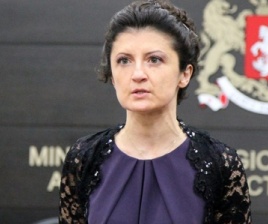 TBILISI, DFWatch–The Georgian justice minister has replaced her first deputy after the new government was approved by parliament.

Justice Minister Thea Tsulukiani explained on Monday that she has known Davit Jandieri since the time when he was her intern for three months at the European Court of Human Rights in Strasbourg.

It was when she was taking stock of the last year’s work that she decided to change her first deputy. Tsulukiani described the last year as “an exam in endurance, seriousness and correct attitudes for everyone”.

As Jandieri’s replacement, she named Alexandre Baramidze, the deputy justice minister, who will be promoted to first deputy. Alexandre Burchuladze and Gocha Lortkipanidze will continue to work as her other deputies and chairman of the National Enforcement Bureau Mikheil Sarkveladze will be her fourth deputy.

Jandieri, who was appointed as first deputy justice minister after the parliamentary election in 2012, responded to Tsulukiani’s statement on his Facebook page. He said that he thinks he has been loyal and decent during the last year and found it rewarding to work with the other ministry employees.

He thanked the current and former prime minister for their support and recalled the first time he met Tsulukiani.

“I met Thea Tsulukiani at the European Court of Human Rights, where I was an intern as lawyer,” he writes. The minister of justice got to know me better when I defended the rights of Sandro Girgvliani’s family in the European court and when I sought to be chairman of Georgian Dream’s election administration in Nadzaladevi, Tbilisi, during the parliamentary election.”