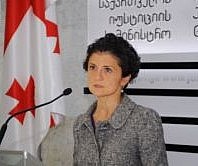 In a separate case, he is investigated for his role in the takeover of Imedi TV.

Kezerashvili was detained in France October 14, as he was about to fly out of Nice airport. Georgian Justice Minister Thea Tsulukiani told journalists that she explained to her French counterpart how important Kezerashvili’s extradition to Georgia is for justice and fairness.

She said the Prosecutor’s Office is working on the documents which must be sent to France.

“As soon as France receives the documents, we expect the court’s decision,” she added.

Tsulukiani thinks that ‘attempts by external forces’ to release Kezerashvili will fail.

She said Georgia cooperated with their French colleagues in order to detain the former minister and that it was a perfect example of bilateral cooperation.