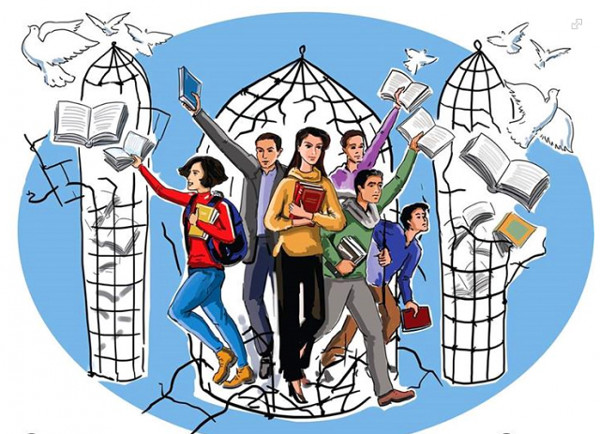 TBILISI, DFWatch–Several journalists in Georgia have been threatened by a radical Islamist that he will ‘spill their blood’ if they don’t remove a cartoon from a website.

The journalists launched the site to help ethnic minorities get an education and rid themselves of the chains of local traditions.

Renessans.ge, which was created in January 2015, aims at attracting attention to the problems of ethnic minorities living in Georgia and encouraging them to get an education, published a cartoon depicting journalists breaking out of cages while holding books.

The picture caused outrage among certain groups of Georgians who believe that the picture shows the journalists not breaking out of a cage, but a mosque, which they consider insulting.

The journalists in renessans.ge provided Kakheti Information Center with audio footage of threats received from Javid Gurbanov, who is head of Imam Ali Charity Fund in Marneuli.

“If you don’t delete this cartoon, but continue this insult, I swear to Allah your blood will spill. I swear to the god, in which you don’t believe, that I will cut your head [off] myself.”

Several of the website journalists have received threats from Gurbanov. They explained that the cartoon shows a cage, not a mosque, but the threats continue, with a demand to stop insulting religion.

One of the journalists received this personal message on Facebook: “Islam is not against education, but if you don’t delete this insult, I swear to Allah, your blood will be spilled.”

The journalists filed a complaint with the police on June 17 and some of them have already been called in for questioning.

On Tuesday, the Ethics Charter of Georgia published an appeal to law enforcement bodies to react adequately to threats and pressure against journalists.