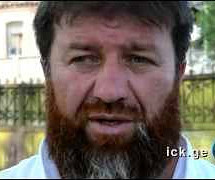 TBILISI, DFWatch–A court in Tbilisi sentenced three men to prison on Monday for associating with or assisting a foreign terrorist organization.

Aiup Borchashvili, former imam of the mosque in the village of Jokolo in Pankisi valley, was sentenced to 14 years in prison. He was on trial for being a representative of the Islamic State in Georgia and assisting the departure of Georgian citizens to Syria and Iraq, Interpressnews reported.

Mr Borchashvili earlier claimed that he never intentionally sent young people to the Middle East so they could join the Islamic State group, although in some cases he assisted their departure.

‘I never had any bad intentions towards Georgia. Everybody who knows me, knows this. I wish I wasn’t considered as someone guilty of going against one’s own country’, Mr Borchashvili said in court.

Two other men, Giorgi Khutunishvili and Davit Pirisebia, were sentenced to 11 and 10 years in prison for the same crimes. They were arrested as they were allegedly leaving the country in order to join the Islamic State.

In their defense, the men argued that they were trying to join the Free Syrian Army, which opposes both the government of Bashar al-Assad and the Islamic State.

“Men travel and join the Free Syrian Army, which is supported by the United States. We can’t understand what connection it might have to the Islamic State,” Pirisebia said in court.

A fourth man was who was also on trial for similar charges, Davit Kuprava, agreed to a plea bargain with the prosecutor. He was arrested as he was allegedly planning to travel to Syria.