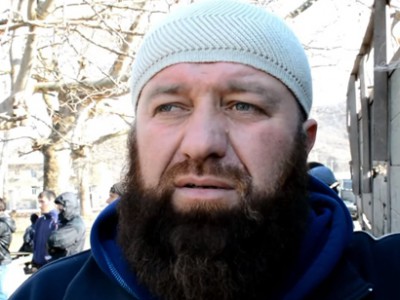 Telavi District Court heard Aiup Borchashvili in the case of providing support to the Islamic State.

36-years-old Mr Borchashvili is a former imam of the mosque in the village of Joqolo in Pankisi valley. In the course of the investigation he admitted that he gave money to three young men, so that they could go to Turkey in order to finance their religious education — not so that they could travel to Syria. The men were arrested in Tbilisi before managed to leave the country.

Mr Borchashvili again rejected claims that he had a connection with the departure of two young men to Syria. 16-years-old Muslim Kushtanashvili and 18-years-old Ramzan Baghakashvili have been reported to have joined the Islamic State in 2015. Mr Borchashvili explained that he refused to assist the men’s departure, yet he agreed to accept baya (‘pledge of alliance’) [to the Islamic State] from them.

Mr Borchashvili pointed out that at one point he visited Syria where he met his relative Tarkhan Batirashvili — a field commander at the Islamic State, widely known by his nom de guerre Abu Omar Shishani, or Abu Omar the Chechen.

‘Aiup said that he went to Syria in order to verify certain information about local groups that had been in circulation; who fought against whom, who had what kind of orientation. Yet, he doesn’t take responsibility for sending people to Syria’, Gela Nikoleishvili, the defendant’s lawyer told ICK.

Mr Borchashvili is accused of being a representative of the Islamic State in Georgia and assisting the departure of Georgian citizens to Syria and Iraq. He faces up to 17 years in prison.