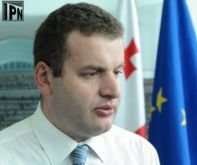 Shota Utiashvili leaves his post as head of the Department for Analysis. He has been the Georgian interior ministry's media spokesperson and representative at the EU's field meetings in the conflict zones in South Ossetia and Abkhazia. (IPN.)

TBILISI, DFWatch – Another central figure in Georgia’s Interior Ministry resigns, after recent changes in the government.

Shota Utiashvili, former head of the Ministry’s Department for Analysis, today announced his decision to leave.

He did not say who will be his replacement. Neither did he specify what he plans to do next, only that he is moving to another structure and it will soon become known.