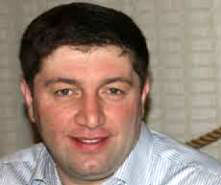 TBILISI, DFWatch–A Georgian man is in hospital in a serious condition after being beaten while in detention awaiting his extradition to his home country.

The man, Davit Chkhitunidze, was detained at Athens airport on August 14 as he was preparing to fly to Turkey, and according to his lawyer brutally attacked while in detention.

His lawyer, Dali Imnaishvili, told Interpressnews on Tuesday that her client has injuries to his head as a result of an attack in the extraditing detention facility. He was brought to the hospital in Athens and is still unconscious and in a serious condition.

Lawyers have not been allowed to visit him yet. They say don’t have information about who attacked him, but that there is reason to believe that it was one of the Georgian prisoners who was in detention along with him.

Chkhitunidze is accused of having illegally eased conditions for four policemen who were jailed for the Sandro Girgvliani murder.

The things prosecutors in Georgia have charged him with took place when he was Deputy Chairman of the General Inspection at the Ministry of Justice about five years ago.

The formal charge is having exceeded official powers. According to the investigation, he is suspected of having made fraudulent documents, and on August 11, 2008, having given a verbal order that the four convicted of murdering Girgvliani be taken out of prison for a fourteen day leave.

Interpol declared him wanted August 9 and issued a red notice.

Another lawyer representing Chkhitunidze, Vakhtang Talakvadze, told journalists that his client wasn’t detained because of the Interpol search but due to an expired passport. He also said that his client was planning to return to Georgia and give testimony to law enforcers, but was detained at the airport.

The lawyers demand his immediate extradition to Georgia.

Sandro Girgvliani, a former bank employee, was killed in 2006 after a scuffle at a cafe in Tbilisi where an Interior Ministry official was holding a party. A quarrel developed, and later four Interior Ministry employees murdered Girgvliani. After their conviction, the four first had their sentences reduced to half and were later pardoned by the president.

After there was a change of government in October 2012, law enforcers reopened the case and found that the four were serving time in prison under advantageous conditions.

According to one witness, they were given leave to go home or to work. When they were in their cells, they could hold parties, drink alcohol and receive sexual services.

The witness later said in a video appeal that prosecutors had pressured him in order to build a case against former government minister Bacho Akhalaia. Prosecutors said other witnesses confirm that the four had privileges.