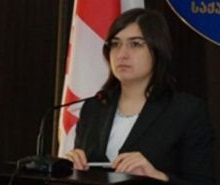 Chiora Taktakishvili, spokesperson for the ruling party, said the PACE observers had received incorrect information from lobbyists from the opposition. (IPN.)

TBILISI, DFWatch – The government in Georgia claims the OSCE’s Parliamentary Assembly is spreading incorrect information provided by lobbyists of a certain party.

A delegation from the OSCE Parliamentary Assembly (PACE) on Thursday released a statement summing up its three-day visit to Georgia for the election period. The statement describes an election campaign containing the signs of Leninism.

The central problem as PACE’s observers see it is the lack of objectivity by law enforcement bodies, mainly from the State Audit Office, but also by the courts, which are acting on unclear and biased instructions. Georgian society is polarized, the observers write, and there are signs of Leninism in the election campaign. This is their general view of the situation after their visit.

Chiora Taktakishvili, spokesperson for the ruling party, held a briefing on Thursday, saying that what PACE’s observers wrote is the result of incorrect information.

“The National Movement tries to manage time before elections within frames of the campaign so that we could contribute to conduct fair elections with our activity. It is important and needs certain attention on the fact that in this specific case information provided by lobbyists of a certain political party for international observers,” she said.

The ruling party spokesperson explains that it is important that the State Audit Office is acting on high standards and provides complete information to the international community and other interested parties regarding each action.

Taktakishvili said that OSCE’s delegation underlined the achievements after the elections in 2008: accurate voters’ list, transparency of campaign financing, and access to media.