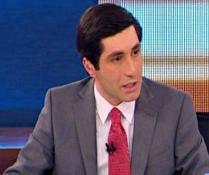 TBILISI, DFWatch–The Georgian government has criticized a TV program for being biased, after it turned the spotlight on promises made by the government in the 2012 election campaign.

The target of the government’s criticism is a program on Maestro TV called Reportaji and by Vakho Sanaia. It is aired Sundays at 21:00.

It is ‘hard to call it unbiased,” the government said in a statement on Tuesday.

The offending debate focused on promises made by the Georgian Dream coalition before coming into power, both in terms of foreign policy, social services and the justice system.

“The report was clearly biased. During the program, the anchor was trying to portray the government as if it hasn’t fulfilled any promise,” the statement reads, adding that Sanaia also had a ‘vox pop’ [call-in segment], but picked out only the desired answers.

The statement underlines that a journalist who wants to be objective shouldn’t fail to see that the current government inherited a ‘difficult heritage’ from the previous one, and goes on to list improvements made in the last two years in various areas, and reforms in health care, prisons, business, education, law and agriculture.

“We hope society will judge and asses what to trust and what not to.”

Specifically about the media, the statements says it is quite obvious to everyone that Georgian Dream has fulfilled one of its main promises, to “released the media from any kind of pressure from the government.”

Today, no-one suspects that any TV station is managed or pressured by the government, which is ‘the greatest achievement for the country on the way to democracy,” the government office stated.

Vakho Sanaia responded the same day that it is hard for the producers of his show to believe that the government would dedicate statements and briefings to a specific TV program.

Speaking live on the show, he said his program never said that nothing has been done by the government, but brought forth facts and summed up the last year and a half.

“This is the first time in my practice as a journalist I have heard that it is possible to use ‘vox pop’ to lie. I think, on the contrary; if we want to know the truth, we should ask the people.”

Mamuka Ghlonti, one of the founders of Maestro TV, told Interpressnews on Tuesday that he considers the government’s statement a form of pressure on the media, as it is advising them how to do their own business instead of just criticizing.

If the government thinks something was not right, they should be aware that there are courts, where such issues can be solved, and if the court decides that the journalist is biased, Maestro will apologize, Ghlonti said.

Transparency International Georgia wrote in a statement on Tuesday that the government is interfering in the editorial independence of independent media.

“Every government representative must accept the fact that every media outlet cannot publish in a way that is acceptable to them,” TIG wrote.

The organization further underlines that now, ahead of the local elections in June, it is particularly important to analyze election promises in order to give voters the information they need to make an informed choice.