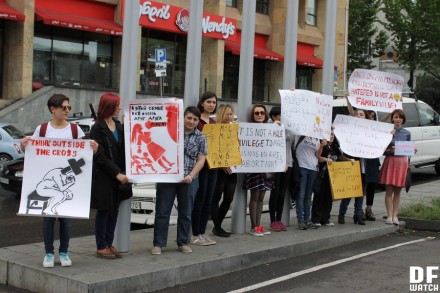 A small group of Georgian feminist activists organised a protest in front of Radisson Blu Hotel in downtown Tbilisi, where the World Congress of Families (WFC) was taking place on Sunday.

The activists carried slogans such as ‘Hatred is not a family value’, ‘Don’t force women to give birth to unwanted children’, and ‘It is not a male privilege to make decisions on rape and abortions’.

The protest was organised by the Independent Group of Feminists during the opening of the conference whose organisers claim they campaign for ‘family values’.

‘It was important for us to make a statement against this event, because it’s against rights and freedoms that every human must have. This group [WFC] tries to present their values as something natural and good. We think that in many ways, these values are inhuman. We want to show that although we’re a small group, there are still some people in Georgia who are against making claims to what a “natural family” means’, Ia Bakhtadze from the Independent Group of Feminists told DF Watch.

WCF is an American organisation which campaigns for policy solutions restricting the rights of women to abortion and contraception and against any sort of laws for LGBT persons in order to ‘protect the natural family’. The organisation was invited to Georgia by Levan Vasadze, who is an activist opposing family planning, modern education methods, and LGBT rights.

DF Watch asked Natia Gvianishvili from the Women’s Initiatives Supporting Group about her opinion regarding the WFC’s claims that they were supporting families, children’s rights, and the ‘natural order’.

‘The double morals and bigotry are the wrong things here. I call this event “the World Congress of Bigotry”, because it brought together a bunch of bigots from all over the world. These people are claiming that they support children’s rights and the strength of the family, but in fact this happens on the expense of ignoring the issues of domestic violence, sexual and physical violence against children, or the fact that in Georgia children die of malnutrition. They are ignoring the fact that gay couples are able to raise children which are absolutely fine. They are ignoring the fact that the basis of a family is love and care and not simply a mom and a dad. The social and economic changed in the world changed how family as a unit looks.

‘The other issue is women’s reproductive rights including the right to abortion, contraception, or in vitro fertilisation. We have medicine and technology that allows us to help infertile couples who want to have kids and these people [WCF] are against using these methods. If people by nature — if we want to speak about nature — cannot have kids, then they’re doomed. Regarding abortion, it’s always the case of being either “prolife” or “prochoice”. It’s a wrong question, because abortion is a right and should be available, but if we work on popularising contraception, this will lower the amount of abortions. We never speak about other forms of prevention; we always speak about prohibitions. I am sick and tired of men-led organisations that have a lot of money deciding on what my reproductive rights should be’, Ms Gvianishvili said.

DF Watch also asked about the prospects for women’s reproductive rights in the context of fact that the Patriarch of the Georgian Orthodox Church, Ilia II endorsed the WCF.

‘The Church has been able to interfere with a lot of legislative issues, but so far they haven’t been able to influence the issue of reproductive rights for women too much although they’ve been invited as experts and advisors many times, which we find unacceptable. It’s not surprising that he’s endorsing this conference, because we remember in how many sermons he attacked women as a group and women’s reproductive rights and their right to fertility treatments. Unless they start lobbying very actively with the government on legislative changes, I don’t see this event influencing the policy. After all, we have a checklist to follow in the process of EU integration and women’s tights are an important and sensitive topic here. We will definitely continue to use it as a leverage to keep the government in line regarding reproductive rights’, Ms Gvianishvili said.