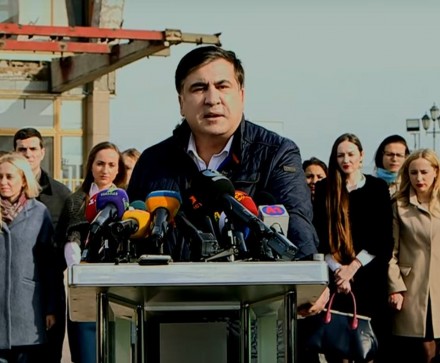 Saakashvili spoke of the reasons for his resignation at a press conference in Odessa.

TBILISI, DFWatch–The exiled former president of Georgia Mikheil Saakashvili announced on Monday that he is leaving as governor of Ukraine’s Odessa region, a position he has held since May 2015.

During a press conference broadcast on his Facebook page, he accused Ukrainian President Petro Poroshenko and his associates of fraud and announced a “new round of struggle“ against crime and corruption in Ukraine.

“Actually, I am fed up dealing with corruption in this region. I am tired of listening to an endless series of unfulfilled promises. I see how the forces of regression are attacking everything progressive here, and we all see how all the reforms were stifled at the start and all of this is happening in front of Ukrainians. This is cynical,” Saakashvili said.

Saakashvili, who came to his post in order to fight corruption in the key port city, in his resignation statement claimed that his reforms were being sabotaged by the central government.

“This is going on quite openly. The Odessa region is being handed over not only to corrupt people, but also to enemies of Ukraine. I am fed up and tired of all this. So in this situation I decided to resign and start a new round of struggle,” he said.

Earlier the same day, Odessa police chief and fellow Georgian Giorgi Lortkipanidze announced that he is also stepping down.
Saakashvili was president of Georgia from 2004 to 2013. Following the end of his second term, authorities in his home country charged him with abuse of power, and he has since been in exile in Ukraine, where he was granted Ukrainian citizenship and later stripped of his Georgian citizenship.

Saakashvili supported Ukraine’s Euromaidan movement and the Ukrainian revolution. Ukrainian President Petro Poroshenko appointed him as a governor of Odessa in May 2015 to carry out innovative reforms and fight corruption.

Before Georgia’s parliamentary elections on October 8, Saakashvili, who also is leader of the opposition United National Movement (UNM) party, made announcements via video link and promised his supporters to return to power if his party would make it into parliament. However, after his party failed to win a majority in the legislative assembly, he reconsidered and announced that he had important duties to fulfill as governor of the Odessa region.