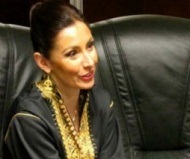 Nino Sukhishvili, chair of Georgian National Ballet, says some of their dancers' reaction regarding prisoners abuse is quite adequate. (IPN.)

Georgian National Ballet – founded at the end of the Second World War — is the country’s most famous dance ensemble and its managers aare known to be Mikheil Saakashvili’s favorites who often appear at the government media events.

“Sukhishvili ensemble dancers came to us today morning and expressed support. They speak not as artists but as ordinary citizens, and their position should be valued,” Maia Panjikidze, spokesperson for the coalition, said on Thursday.

The dancers think the current situation in the country doesn’t leave room for artists to stay out of politics. They say it is time for artists to express their own position as citizens and against injustice, so as not to give the government an opportunity to use their art for its own political benefits.

Some of them told DF Watch that the ensemble’s charity didn’t know anything about their decision and it is unknown to them what position they will have.

Nino Sukhishvili, chair of the dance group says that there are 200 members in their ensemble and they each have own political position, and their reaction regarding prisoners abuse is quite adequate.

She also expressed concern regarding the recently released video footage of prisoners’ torture and that she is ashamed as Georgian of what happened.

“I do not engage in politics but as a Georgian citizen and as a human I will always observe my position and protest. Everything has its limit.”

On Thursday, the well-known Georgian singer Bakur Burduli rejected the Medal of Honor as a sign of protest.

“When such things happen in their government period I cannot stand with them, with people who awarded me with the Medal of Honor.”