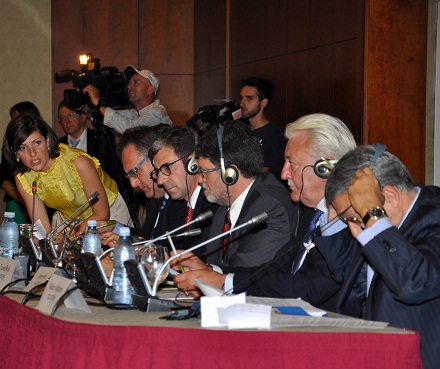 TBILISI, DFWatch – OSCE says Georgia made an important step in consolidating the conduct of democratic elections, but there are still some key issues left needing to address.

The organization has the largest contingent of election observers here, under its Office for Democratic Institutions and Human Rights (ODIHR), and today held a press conference at Tbilisi Courtyard Hotel together with the OSCE Parliamentary Assembly, the Council of Europe and NATO’s Parliamentary Assembly.

“The elections were competitive, with active citizen participation through the campaign, but the campaign environment was polarized and tense, with some instances of violence. The campaign often centered on the advantages of incumbency, on one hand, and private financial assets on the other, rather than on concrete political platforms and programmes,” they state.

“While freedoms of association, assembly and expression were respected overall, instances of harassment and intimidation of party activists and supporters negatively affected the campaign environment, and often ended with detentions and fines of mostly opposition-affiliated campaigners. This contributed to an atmosphere of distrust among contestants.”

«Despite shortcomings, these elections were very competitive,” said Luca Volonte, the Head of the Parliamentary Assembly of the Council of Europe (PACE) delegation.

“The political forces elected to the new Parliament, both in the majority and opposition, should now take up their responsibilities and work together to address these shortcomings for the further democratic development of the country. PACE will continue to co-operate actively with all forces in the new Parliament in these important reforms.”

“Georgia is an important partner for the EU, and we continue to be a steadfast supporter of promoting democracy and reform in Georgia,” Milan Cabrnoch, the Head of the European Parliament delegation said.

«We congratulate the Georgian people on the successful completion of their parliamentary election, which represents an historic milestone in Georgia’s democratic development. Yesterday’s elections mark a victory for the Georgian people: a truly competitive election produced an outcome that represents a significant new configuration in sharing of political power in Georgia.»

The ambassador said the US is looking forward to working with the parliament and government formed after the final election results are tabulated and all complaints have been processed to further broaden and deepen our already strong bilateral relationship.

«We congratulate President Saakashvili on presiding over another important stage in the maturing of Georgia’s democracy and on his statesmanlike handling of these events; we congratulate Bidzina Ivanishvili on Georgian Dream’s successful performance.»