Georgian Dream almost caught up by the UNM: IRI polls

Georgian Dream almost caught up by the UNM: IRI polls 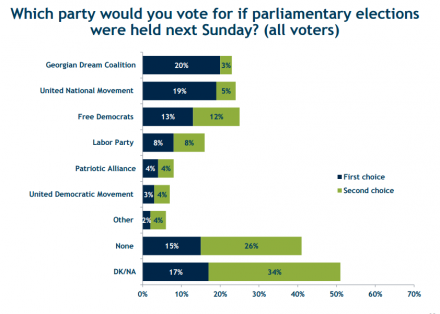 Georgia’s governing coalition has almost been caught up by the former ruling party, according to the latest poll by International Republican Institute (IRI), published Friday.

If there were held parliamentary elections next Sunday, 20 percent of Georgians would vote  (first choice) for the Georgian Dream coalition, while 19 percent would vote for the former ruling party, the United National Movement.

In the IRI polls one year ago, GD coalition and the UNM had 36 percent and 14 percent respectively.

Among the other parties, 13 percent would vote for the Free Democrats, which left the coalition in November, 2014 following the dismissal of its leader, Irakli Alasania, as defense minister. In the same polls a year ago, the party had 10 percent.

15 percent said they would vote for none of the parties, and 17 percent had no answer.

In terms of trust the new IRI poll once again shows that people in Georgia trust the church the most with 89 percent. It is followed by the army, media, education system, police, the president’s office (46 percent), prime minister’s office (43 percent), government (36 percent), Parliament (34 percent). Courts are trusted by 27 percent, prosecutor’s office by 26 percent.

Asked in what direction things in Georgia are going on, 70 percent indicated wrong direction, and only 16 percent right direction.

Respondents indicated that the government’s biggest failures are unfulfilled promises, the economic crisis and unemployment, while its greatest accomplishments are solving the healthcare problems, providing public medical insurance and bringing about visa liberalization with the EU.

People questioned in 2016 think that unemployment, general economic situation and territorial integrity are the main problems which Georgia is facing.

IRI usually didn’t publish political ratings but used to introduce them to the parties. The party leaders then spoke out about the results, so they become known to people through rumors. As this policy caused much confusion and criticism toward IRI, it was changed.

IRI’s Public Opinion Survey was conducted from March 12 to April 2, and about 1,500 people were asked through face-to-face interviews at respondents’ homes.

The survey was conducted by Dr. Rasa Alisauskiene of the public and market research company Baltic Surveys/The Gallup Organization on behalf of the International Republican Institute. The field work was carried out by IPM Research, Ltd.