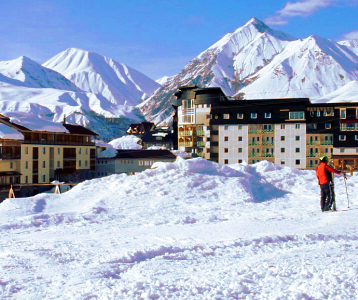 TBILISI, DFWatch–Georgia’s winter resort Gudauri had 127% growth in visitors since last year. Now developers plan a Radisson and a Sheraton hotel there.

Malkhaz Kunelauri from the real estate company RED-CO told journalists that the first phase of the planned new hotels involves the development of 10 hectares in the mountain resort.
RED-CO plans to start construction work in November and finish in five years.

The plans are prepared by the Canadian company Ecosign and in addition to Radisson and Sheraton they involve the construction of 26 buildings in Gudauri, including cottages and guesthouses.

“So in total there will be 1500 more rooms available in Gudauri,” Kunelauri said.

The investment amount will be USD 70 million.

Vice Prime Minister Dimitri Kumsishvili yesterday visited Gudauri to familiarize himself with the plans. During the visit he said that the government has invested 170-180 million laris in the development of Gudauri’s tourism potential. The number of visitors to the resort increased 127 percent from 2015 to 2016, according to Kumsishvili.

Ten rope-ways are under construction in Georgia; three of them in Gudauri. In total, 23 million laris will be invested to develop Georgia’s tourism potential, the vice PM said.

He visited another construction site of the new hotel, which is carried out by the company Magi Style. It will be finished in 2018 and have 140 rooms. The price tag is USD 10 million.