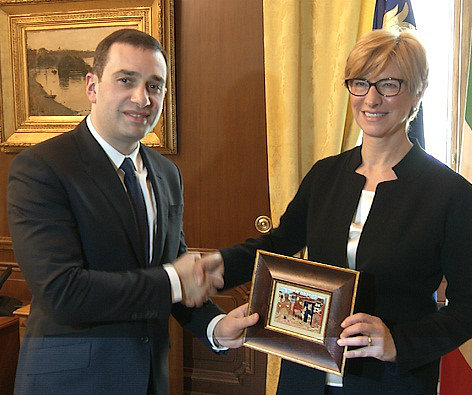 TBILISI, DFWatch–Italy and Georgia will strengthen their defense cooperation, according to a press release published by Georgia’s Ministry of Defense.

Irakli Alasania, the Georgian defense minister, on Thursday met his Italian colleague Roberta Pinotti during a visit to Italy.

According to the ministry’s press release, they discussed strengthening relations, especially in training and education issues.

The two defense ministers also discussed the process to integrate Georgia with NATO and the possibility that the country may get a Membership Action Plan, or MAP, during the upcoming NATO summit in Wales, the ministry wrote.

“I’m pretty sure that our bilateral relationship will be deepened, will be further, wider, and soon this relationship will be materialized in concrete steps by Italy and Georgia,” Alasania is heard saying in a video the Georgian Ministry of Defense posted from their joint press conference.

Pinotti congratulated Georgia on already having made making important steps.

“We have a very strong and friendly relationship that has been further strengthened by this meeting,” she says in the video.

“And of course I will report to my prime minister all the information I was given today about Georgia’s progress, so this can be a step forward in the integration campaign.”

The ministry also writes that Alasania visited the Centre for High Defence Studies during his two-day visit to Italy, where he delivered a speech to the students and high ranking officials.

The Georgian defense minister also held a meeting with the chairman of the defense committee at the Chamber of Deputies of Italy, Elio Vito.