Georgian consul in Turkey accused by newspaper of beating woman

Georgian consul in Turkey accused by newspaper of beating woman 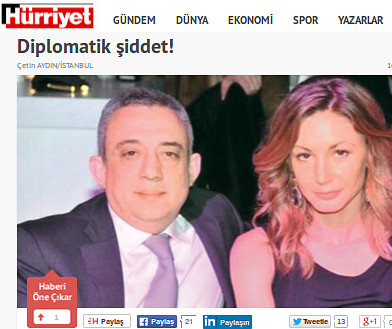 TBILISI, DFWatch–The Georgian consul in Istanbul denies a report in a Turkish newspaper that he beat a woman working for him as a stylist.

The article quotes the girl saying that she got into an argument with Asashvili, who started yelling and beat her on the nose.

“I felt it was broken. It is so badly injured that I need plastic surgery,” she said at the hospital.

The newspaper further reports that the two have a two-year long relationship, which became problematic in recent months.

On Tuesday, Asashvili told Interpressnews that what Turkish media reported is untrue and his friend is also concerned about this. He said that he really knows the woman and she is his friend and they have ‘wonderful relations.’

He said they are both concerned about this article and will both react to it. Most likely they will complain directly to the newspaper, as it will be difficult to launch a lawsuit for defamation, because the article frequently uses word ‘probably’, Asashvili explained.

He thinks it was not a deliberate attempt to smear him, but he wants to find out why the article was written.