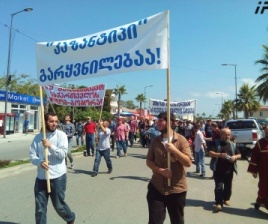 TBILISI, DFWatch–Georgian conservatives continue trying to stop the music festival KaZantip from going ahead in Georgia and Thursday organized another rally, this time attempting to enter the festival compound.

Orthodox clerics and followers a few days ago announced that they would hold a peaceful rally in Anaklia, where the festival is to be held, and police was on spot to avoid any confrontation.

Protesters began their demonstration at a church in Anaklia and walked toward the location of the festival after conducting a prayer. Clerics called for ‘protecting moral’ and ‘not to turn Georgia into Sodom and Gomorrah.’ They appealed to the government not to let perversion take place.

“KaZantip is immorality” – their posters said.

Protesters are joined by the non-parliamentary opposition, including Jondi Baghaturia, leader of Georgian Dasi, and radical group called Union of Orthodox Parents, which is mostly known for attempting to disperse and resist what they think is immorality, like Halloween party or certain TV programs.

“It’s a shame when some government officials try to support prostitution for money. If it continues, this government has no future,” Baghaturia told journalists.

KaZantip is a used to be held in Crimea, but was moved to Georgia following the Russian annexation made it impossible to have it there this year. Organizers received an invitation from the Georgian government to hold it in Anaklia, a beach resort close to the border with Abkhazia, which they accepted.

Local people living in Anaklia have demonstrated against canceling the festival. They expect to have some income from the influx of festival goers who need a place to stay, and some have taken bank loans in order to refurbish their houses and offer accommodation.