Georgian Church explains its position on the May 17 events

Georgian Church explains its position on the May 17 events 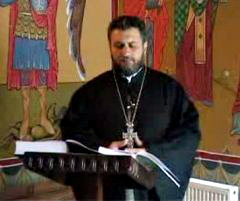 TBILISI, DFWatch–The Georgian Orthodox Church separates itself from the violent incidents of May 17, when clerics disrupted LGBT activists from holding a peaceful rally, resulting in 28 injured.

Church spokesman Mikael Botkoveli on Wednesday evening said at a briefing that the Church separates itself from violence, but thinks that the planned rally was provocative.

He said that in a country where the vast majority of people are Christians, such kind of rallies are perceived as propaganda for homosexuality, and this causes ‘justified protest’.

“Organizers didn’t take into account anything and selected a time and location which was related to historical memories and emotional traditions, which became additionally irritating and provocative factors,” he said.

He adding that the country cannot accept legalization of a sin, but that violence has no justification.

Botkoveli remarked that it is unfortunate that there were clerics participating in those events and ‘those single persons harmed the whole church.’

“The Patriarchate will study their actions and will react adequately.”

Despite a number of statements from government officials that the guilty will be punished, so far only four persons have been detained and charged for petty hooliganism, while there are more and more reports about someone being beaten in the streets for being dressed ‘differently’ or different hairstyle or walking.

Meanwhile, Patriarch Ilia II has returned to Georgia from Turkey and said that it is unacceptable that some groups want to establish certain ideas in Georgia, but it is also unfortunate that Georgian clerics acted impolite.

He called for peace for everyone on Wednesday.

“It is not right to insult someone. Only kindness and love cures evil,” he said.

A day before May 17, when LGBT activists were planning to organize a rally against homophobia, Ilia II appealed to the government to withdraw the permission to hold the rally. His statement was later thought to encourage certain religious groups to participate in a counter-demonstration which was being planned.

Davit Usupashvili, Speaker of Parliament, said a few days ago that he was surprised when he read the Patriarch’s statement. He said it was surprising to issue such a statement about withdrawing a rally permission without consultations with government bodies.

“The May 17 rally was announced much earlier, and 4-5 days earlier the Prime Minister also spoke about it,” he said, adding that anyway it wasn’t possible to abolish the permission, because it isn’t needed in the first place, and everyone is allowed to gather and express protest.

“I don’t thinks this type of statement could bring any positive to life of statehood, because it was pretty obvious that the government couldn’t prohibit anything after this call,” he said during a visit to Channel 9.

The Speaker said no one will be exempt from punishment if they violated the law, including clerics.

“Until there is equality under the law despite political views, skin color, ethnic origins, religious beliefs, we cannot have a state,” he added.