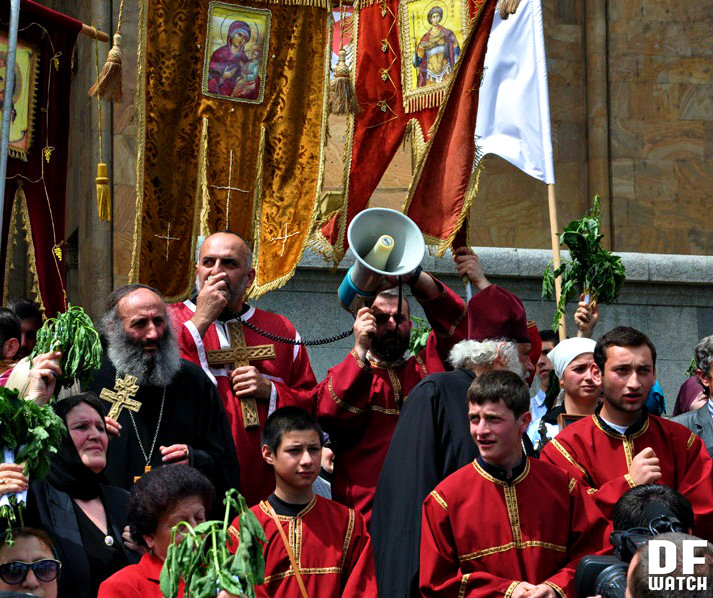 TBILISI, DFWatch–The Georgian church is distancing itself from the violence on May 17, but maintains that LGBT propaganda is not acceptable.

Patriarch Ilia II commented on the violent clashes between his parishioners and LGBT campaigners in Tbilisi.

Ilia II called on the confronting parties to leave the streets on Friday.

“A person may fall into sin, this is a sin and no religion will support this sin,” he said at the airport before leaving for Turkey. “We should know that this is a sin to God, but we also can express concern and not intervene in private life.”

Ilia II called on people to leave the streets and ‘pray for each other’.

Prime Minister Bidzina Ivanishvili said he condemns violence, and that freedom of assembly is fundamental to Georgia’s democracy.

The prime minister’s statement, which was published on the government’s official website, called on every Georgian to respect democracy and freedom of speech.

“Every Georgian citizen benefits fully and equally from this right. Acts of violence, discrimination and restriction of the rights of others will not be tolerated, and any perpetrators of such acts will be dealt with according to the law,” his statement reads.

According to his statement, more than 2 000 policemen were mobilized on Friday in order to avoid confrontation, but thousands of counter-demonstrators ‘overwhelmed’ them.

“Some of whom (counter-demonstrators) engaged in violence, broke through the police cordons and attempted to physically assault the LGBT representatives. In order to ensure the security of the rally participants, special forces transported them to an alternative location,” the PM writes.

President Mikheil Saakashvili also commented on Friday’s events. He said the government should not allow violence among people.

“I do not agree that today’s violence was a result of some actions of ordinary police and it should be blamed on them. It is a political responsibility,” he notes. “The country has a government so that the latter will not allow violence between people.”

“Now we should sit down both government and opposition, people of different views, and understand that we have one homeland and we want Georgia to become stronger, not the contrary,” he said, adding that they all together should negotiate to solve all those issues within the frames of the law, and only through dialogue.

Meanwhile, the Interior Ministry launched an investigation into Friday’s events.