Georgian candidates on the campaign trail

Georgian candidates on the campaign trail 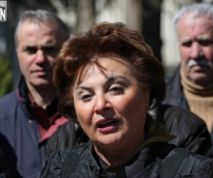 TBILISI, DFWatch–Less than three weeks left before the presidential election in Georgia, candidates are busy conducting their election campaign.

Davit Bakradze, the candidate for the National Movement, on Wednesday met with people in the Racha region.

He opened a new election headquarter in Lentekhi and presented his election program to locals in several villages in the region.

Bakradze asked the government to sit down and discuss how to create a new plan to improve life for the population in mountainous areas, who are living under difficult conditions, places such as Lentekhi, Lechkhumi and Svaneti.

Giorgi Margvelashvili, the Georgian Dream coalition candidate, visited Samegrelo region to hold a final meeting in Zugdidi, the largest town in this region.

Prime Minister Bidzina Ivanishvili attended the meeting. He also presented his election program and promised that the police will be better. Police will no longer threaten anyone and there won’t be any abuse. Margvelashvili continues his campaign in Svaneti.

Labor Party candidate Shalva Natelashvili said at a press conference that more than 300 soldiers in the third brigade suffered food poisoning a few days ago, and claimed that the government is hiding this. He demanded that there is created a parliamentary committee to study what happened, and find out who is supplying the army with poisoned food.

The independent candidate Zurab Kharatisvhili, who is former head of the Central Election Commission, on Wednesday met with locals in the village Teleti in Kvemo Kartli. He introduced his plans and spoke about agricultural issues.

Nestan Kirtadze, another of the candidates, called on the government to start solving the problems of the population in the mountainous regions of Georgia. She said at a press conference that during her meetings with the population she has learned that people have to deal with heating problems as winter is approaching. She also suggested granting a special status to villages bordering the conflict zone and supplying the population there with free natural gas.

Mikheil Gela Saluashvili says he doesn’t perceive the rest of the candidates as his competitors. He spoke about the Bible, claiming that it prescribes certain political processes in Georgia, like changing Shevardnadze’s ten-year government through revolution.

Nino Chanishvili, president of the Global Business Development Center, focused on the business sector and promised to strengthen small and medium sized businesses. She said she thinks the development of business is the most important now in a country where 65 percent of the population perceives themselves as unemployed.

At a press conference, Chanishvili said that the real problem for Georgia now is territorial integrity, while the rest of the problems can be managed.