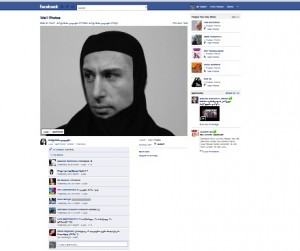 A manipulated photo of Christian Democrats leader Giorgi Targamadze dressed as a nun is being circulated in social media, dubbed Minister of Moral.

TBILISI, DFWatch – A new initiative by the moderate opposition Christian Democrats to ban same-sex marriage and write Christianity into the constitution is being discussed in the Georgian blogosphere.

The initiative has been criticized by the government, parliamentarians from the governing party, the ombudsman, non-governmental organizations and ordinary citizens, and is now also being criticized in the blogosphere.

The Christian Democrats want the state to only recognize marriage between a man and a woman. Another part of the prosposal is that what they call ‘immoral persons’ can not hold public office.

Critics of the proposal describe it as ‘legalizing homophobia and hate speech’.

Ruling party MPs, who control a constitutional majority, have promised that parliament will never adopt the proposal, but critics are still arguing against it.

“We live in a circus, really, this is a circus not country,” one users of social media writes, quoting Targamadze’s initiative.

People have been sharing a manipulated picture of Targamadze dressed in black as a nun, and named him Minister of Moral.

“It’s shame having homophobic politicians in the country.”

Some even called the proposal political suicide.

“I consider the statements made by the leader and members of the parliamentary minority which were fraught with homophobic spirit no less worrisome than the proposed changes. Unfortunately, part of their statements contained hate speech, which, in my opinion, encourages stereotypical and discriminatory attitudes in society, creating a danger that sexual minorities may be insulted and ostracized from society,” the Public Defender argued in his comments.