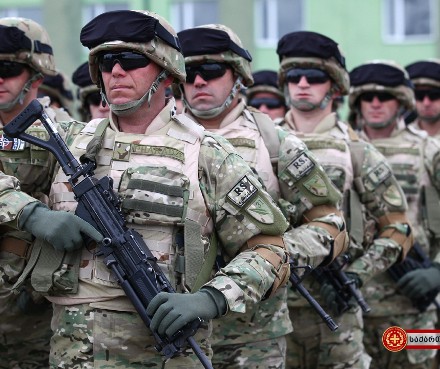 TBILISI, DFWatch–A farewell ceremony was held at Vaziani military base Monday for one hundred Georgian soldiers who are departing for Afghanistan.

The soldiers, who come from the 31th infantry battalion, are to take part in the NATO-led Resolute Support Mission, which will continue the foreign troop presence after ISAF ended on December 28, 2014.

Resolute Support began on January 1, and consists of 13,500 soldiers, 11,000 of whom are American. It will provide training and support for Afghanistan’s military.

The Georgian battalion will serve six months in Kabul, in accordance with a decree parliament adopted on December 26, 2014.

In total, Georgia will contribute 750 soldiers to Resolute Support. A hundred will serve under US command, while another hundred under German command.

The first one hundred left in January to serve under German command in Mazar-i-Sharif.

The Georgian soldiers are to carry out combat patrol and rapid reaction tasks, and ensure the security of the perimeter of a base, according to the Defense Ministry.