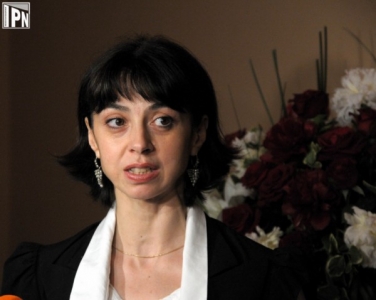 TBILISI, DFWatch–Nino Ananiashvili, a former prima ballerina at Moscow’s Bolshoi Theater, was criticized in Georgia for performing at the theater in the Russian capital on February 25, because in her home country, the day is observed as the Day of Soviet Occupation.

Ananiashvili is artistic director of the Georgian State Ballet, and was an active supporter of former President Mikheil Saakashvili.

After the performance at the Boishoi Theater, she was strongly criticized by members of Saakashvili’s National Movement party.

The concert was held in commemoration of Ananiashvili’s mentor, Raisa Struchkova (1925-2005), who was a dancer and People’s Artist of the USSR.

But it was not received well that Ananiashvili, who also hosted the evening, performed on the same day as Georgia mourned those who died in the fight against the Red Army invasion 95 years ago.

“The date coincided. I didn’t think of it,” was her first comment after the concert, where she performed along with Tbilisi ballet company.

She said that her concert was planned one year ago and was financed by Russia.

The Georgian prima ballerina had a special relation with Struchkova, who taught her for twenty years.

Ananiashivli has been head of Tbilisi Opera and Ballet Theatre since 2004 by invitation of Saakashvili. Her husband Grigol Vashadze was foreign minister during Saakashvili’s presidency.