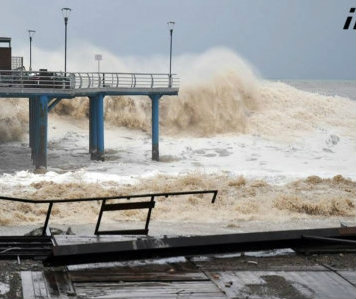 TBILISI, DFWatch–Heavy rain hit Georgia’s southwestern parts on Monday, but so far without causing the amount of damage which was feared after meteorologists issued a dire forecast the day before.

Last night, there was strong wind and a constant downpour in the provinces Guria and Adjara.

A magnitude 4 storm raged along the Adjara coastline, a popular tourist destination with beaches and resorts. No casualties have been reported, but there has been minor material damage in Batumi.

In Guria, the situation is more serious. The region’s administrative center Ozurgeti was flooded, as were many villages. Almost all rivers in this the smallest of Georgia’s regions spilled over their riverbeds, wreaking havoc on roads and nearby buildings.

On Sunday, the National Environmental Agency’s Hydrometeorological Deptartment reported that from Sunday night, the weather across Georgia would worsen.

The department warned of floods in western parts of the country, especially Adjara and Guria, which were hit by heavy rain and floods a week ago.

This forecast caused much fuss among residents, as well as in the government. The State Security and Crisis Management Council issued a warning on Sunday, asking resident to avoid the Black Sea coastline and stay away from river banks.