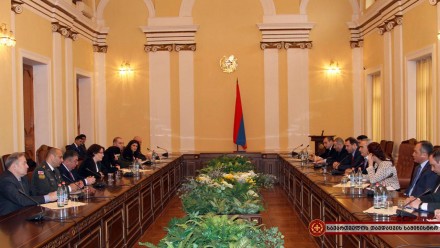 TBILISI, DFWatch–Georgian Minister of Defence conducted a series of meetings with Armenia’s prominent politicians and commented on issues linked to Armenian–Georgian cooperation.

Minister of Defense of Georgia Tinatin Khidasheli concluded her three-day visit in Armenia with signing of a bilateral military cooperation agreement for 2016.

The agreement was signed during a meeting with Armenian Minister of Defense Seyran Ohanyan on 2 February. It contains provisions on exchange of experience in the field of peacekeeping, military education, professional training, and strategic planning.

‘We are unanimous in having every reason to be proud of friendly relations between our countries. Armenia and Georgia are important to each other in the field of security, politics, economy, and culture. Close relations in these areas created preconditions for consistent cooperation in the field of defence, starting in 2010’, Mr Ohanyan said.

‘Today we signed a military cooperation programme for 2016 and I am sure that soon we will broaden our agenda for cooperation, because the opportunities are growing. As for Azerbaijan in Turkey, the two countries are our strategic partners. Turkey is our neighbour and a member of NATO, which makes our partnership deeper and stronger than with any other neighbouring country’, Ms Khidasheli said.

During a joint press conference, Ms Khidasheli noted that Tbilisi and Yerevan aren’t content with how each country’s parliamentary delegations vote over strategic issues in the Parliamentary Assembly of the Council of Europe (PACE).

On 26 January, the Georgian delegation to PACE voted in favour of two resolutions on Nagorno-Karabakh, which Yerevan strongly opposed. While resolution Escalation of Violence in Nagorno-Karabakh and Other Occupied Territories of Azerbaijan proposed by MP Robert Walker (UK) was rejected, PACE adopted resolution Inhabitants of frontier regions of Azerbaijan are deliberately deprived of water proposed by MP Milica Marković (Bosnia and Herzegovina).

‘I’m not a member of the Georgian Parliament anymore and I represented Georgia in PACE a year ago. I can’t comment on my colleagues’ decisions, as I represent a different branch of the government. However, if we take into account the statistic of Georgian and Armenian delegations’ voting patterns in PACE, I don’t think that any of us is happy with it. I say it from my own work experience in PACE. I believe this is how politics work’, Ms Khidasheli noted.

During her visit, Ms Khidasheli also met with President of Armenia Serzh Sargsyan, Chairman of the National Assembly Galust Sahakyan, Prime Minister Hovik Abrahamyan, Minister of Foreign Affairs Edvard Nalbandyan, and Catholicos of All Armenians Garegin II. She also visited the Armenian Genocide memorial complex on the hill of Tsitsernakaberd in Yerevan.