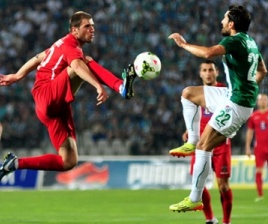 The fight broke out during a match between Georgia’s Chikhura played and Turkey’s Bursa. (Interpressnews.)

TBILISI, DFWatch–Georgian and Turkish soccer players clashed in Tbilisi on Thursday, during a qualification match for UEFA Europe League.

Georgia’s Chikhura defeated Turkey’s Bursa with a score 4-1 in a penalty shoot-out.

The scuffle started when a Georgian football player celebrated the goal at the tribune of the Turkish fans, but the situation was soon defused by police.

Later, there was another quarrel at the media room, where Turkish and Georgian journalists started insulting each other and fighting, until the police rushed in to separate them.

The match was the second qualifying round of teh 2014-2015 UEFA Europe League and took place at Mikheil Meskhi stadium in Tbilisi.

Chikhura will continue playing in the third qualifying round and will play against Neftchi Baku of Azerbaijan on July 31 and August 7.