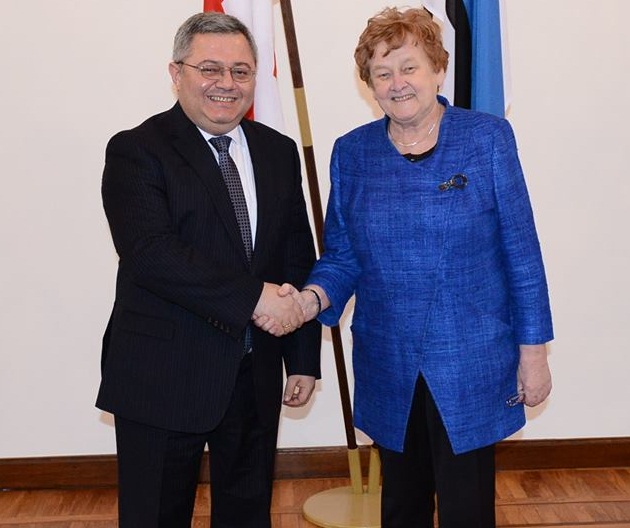 On Monday, the Georgian and Estonian speakers of parliament held a meeting to discuss bilateral relations, European integration and the upcoming NATO summit later this year.

Georgia’s Speaker of Parliament Davit Usupashvili said after the meeting that the Estonian experience is important for Georgia on the way to European integration, and the practice of this country is a demonstration of what expectations Georgia can have.

He continued saying that Georgia has not forgot the decision made at the NATO summit in Bucharest in 2008 that it will join the Alliance and continues fulfilling its obligations, but despite this, no specific results are yet visible.

Usupashvili said that Georgia expects to receive a Membership Action Plan (MAP) from NATO, but if not, the country may face certain threats in regard to integration with Europe.

The speaker said friends in Estonia are assured that Georgia is able to change its government through elections and this is a demonstration of European standards.

The parties agreed that Georgia will have the support of Estonia in foreign relations.

“In a few months we must sign the Association Agreement [with the EU] and we mustn’t allow anyone to interrupt this process – either outside forces or domestically,” he continued.

“We have to study a lot, and our colleagues are ready to share experience with us.”

Ene Ergma, Estonia’s Speaker of Parliament, saw Georgia’s parliamentary election in October 2012 and peaceful transfer of power in a positive light, remarking that the last presidential election was also a great success. He said that parliaments of Georgia and Estonia are actively cooperating and this will continue in the future.

Ergma said 2014 is an important year for Georgia, and Estonia is ready to assist and support the country.

After meeting with his colleague, Usupashvili held a public lecture at the European House of Talllin, where he said that the Georgian government has not changed its foreign policy priorities.

He also spoke about the challenges which Georgia faces after agreeing on an Association Agreement with the EU. Usupashvili said he thinks Georgia has a difficult and important period ahead of it, as there are real threats and mechanisms which may be used to devaluate European values, until the final signing of the agreement sometime in fall this year.

Georgia expects specific results from the 2014 NATO summit, results which will strengthen the country’s political stability and security, he added.