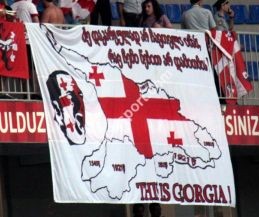 Chikhura supporters brought with them a map which shows Georgia with expanded territories.

TBILISI, DFWatch-UEFA has issued a 15,000 euros fine to a Georgian football team after its supporters clashes with supporters of an Azerbaijanian team in Baku.

The clashes took place during and after a qualification match for UEFA Europe League.

After the match, another brawl broke out between Georgian fans of Chikhura FC from the western Georgian town Sachkhere, the hometown of the former prime minister and billionaire, Bidzina Ivanishvili, and Azerbaijani police.

The conflict was triggered by a map Chikhura fans had brought with them, in which the territory of Saingilo was shown as included in Georgian territory and marked as ‘this is Georgia.’ The historical province Saingilo is now part of Azerbaijan and populated partly by Georgians. It is deemed by many in Georgia as a historical Georgian land improperly attributed to the Azrbaijan Soviet Socialist Republic in early 1920s by the Bolsheviks.

Apart of Saingilo, which encompasses Azerbaijan districts of Zakatala, Kakhi and Belokani, were marked as Georgia other historical provinces too, also deemed by many Georgians as natural parts of the country but improperly stripped by other states. Among them lands of Tao-Klarjeti, now part of Turkey, Lore, part of Armenia and Sochi area in Russian Federation.

About ten Georgian fans were detained as a result of clashes.

President of the Baku Neftchi AC said after the match that Azerbaijan and Georgia are friends but Georgian fans brought some ‘separatist map’.

“Why was this necessary, aren’t we friends?” he asked.

“What we saw today wasn’t football. The match didn’t end well, but good that we didn’t let in any goals,” he said, commenting on the match which ended in a draw 0-0. This is a favorable result for Chikhura, which will have another match with Neftchi August 7, in Tbilisi.

“We love attacking open football. Probably the second match will be like this,” the Neftchi FC pesident added.

The president of Chikhura said he is concerned over what has happened.

“Azerbaijan is our friend and neighbor. Those who brought this flag are not real fans of Chikhura. We thank real fans for their support,” said Berdia Shikakidze, the Georgian club’s president, and apologized for the conduct of Chikhura fans, adding that they were not members of the team’s official fan club.

Several Georgian journalists were arrested in Baku too. Among them, employees of TV3, Maestro and Imedi. They claim that were arrested unlawfully by Azerbaijani police while filming the brawl between the police and Chikhura fans. They were forced to erase the footage and soon freed, as were the detained Georgian fans. They return to Tbilisi on Friday.

In July Chikhura played two matches against Turkish FC Bursaspor. After the last match in Tbilisi there were clashes between the football players and later between Turkish and Georgian journalists.

Now, the Georgian football federation vows to ensure a high level security during the next match between Georgian and Azeri football teams on August 7.