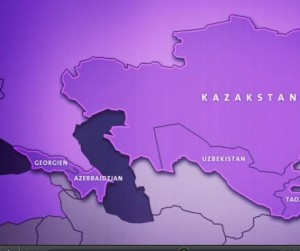 In a report on Swedish public broadcaster SVT, Georgia is depicted as part of "the dictatorship belt", but the host clarifies that it is "not a dictatorship, but not a democracy either". (Screengrab from SVT1.)

TBILISI, DFWatch – Georgia’s ambassador to Sweden protests against the portrayal of his country as an Orwellian society where everybody is under surveillance by the secret police.

Ambassador Konstantin Kavtaradze sent a letter to SVT, the Swedish public broadcaster, the same day as a program was broadcast which depicts Georgia as part of what is called “the dictatorship belt”; the former Soviet countries along Russia’s southern borders.

In the letter, Kavtaradze expresses surprise that Georgia was lumped together with countries that are severely criticized for human rights violations.

SVT1’s investigative report shows how the regimes in Georgia, Azerbaijan, Kazakhstan, Uzbekistan and Tajikistan are using telephone surveillance in order to monitor and suppress those who hold different opinions than the authorities, as well as independent journalists.

The program, which is called Uppdrag Granskning (Mission Investigation), was broadcast on SVT1 Wednesday April 18, and in one of the on-screen graphics, Georgia is depicted as part of “the dictatorship belt”, though in the commentary, it is introduced as “not a dictatorship, but not a democracy either”.

“The security services in the country are using telecommunications as a weapon against the opposition and the free press,” program host Janne Josefson says about the Saakashvili regime.

Then footage is shown of how a crowd of mostly peaceful demonstrators was assaulted by a composite crowd of police, special task forces and semi-official vigilantes on the night of May 26 2011 in front of parliament, which led to at least four deaths. Many were beaten to a pulp and some shot with rubber bullets without being given a chance to leave the area voluntarily.

“Two journalists who documented the violence afterwards have their phones subject to wiretapping,” Josefson says.

A video clip shows how Rustavi 2 broadcast one conversation between Irakli Gedenidze and Zurab Kurtsikidze with photos of them on screen.

“The photographers were detained and accused of spying. They were subscribers of Teliasonera’s subsidiary Geocell.”

Gedenidze and Kurtsikidze were two of four Georgian photojournalists accused of being Russian spies shortly after the May 26 violence. The case never came as far as to a trial, and the full story about them is not yet known, as they have been keeping strikingly silent after they signed a plea bargain agreement. Many believe that the entire case was retribution for their work in documenting the regime’s violence, just like one of them wrote in a statement right after they were arrested.

SVT’s program focused on subsidiaries of the mobile giant Teliasonera, and was a survey of how mobile operators cooperate with dictators in former Soviet countries to suppress human rights activists, opposition leaders and independent journalists. Apart from Geocell in Georgia, the list consists of Azerbaijan (Azercell), Kazakhstan (Kcell), Uzbekistan (Ucell) and Tajikistan (Tcell).

Teliasonera’s subsidiaries are cooperating with the security services in the regimes’ search for critics and people with different opinions. In Azerbaijan and Uzbekistan, the security police even have their own rooms inside Teliasonera’s offices, dedicated to phone surveillance.

TeliaSonera, the largest owner of which is the Swedish state, says it is only following the laws of the regimes. A spokeswoman told SVT that the police in all countries have the right to do surveillance, and TeliaSonera has not authority to stop them.

Human rights activist Irina Chalip in Azerbaijan says this is an excuse in order to avoid taking responsibility.

”If I buy a concentration camp, I can claim that what happens inside is not my business, I only own the land it is located on. Companies that invest in totalitarian countries must understand that they are going to be dragged into the dictatorship’s dirty business. They become accomplices.”

One of Sweden’s largest newspapers, Aftonbladet, calls for the Swedish government to intervene. “Modern telecommunication has become the perfect weapon of a dictatorship against the opposition and free media, as in George Orwell’s dystopia 1984 about the total surveillance society. Only that now with Teliasonera as contractor.” […] “When a Swedish-Finnish state-owned company actively contributes to human rights violations, the government must act,” the respected newspaper writes.

Ambassador Kavtaradze writes in his “humble” comment to SVT that Georgia has undergone a profound and remarkable democratic transformation since 2003, citing reports by the EU, Transparency International, the World Bank and other international institutions as proof that there has been what he calls “radical progress” with respect to the human rights situation. Georgian legislation fully protects freedom of speech and shields government critics from defamation lawsuits, he claims.

Kavtaradze further claims that comprehensive judicial and criminal justice reforms have strengthened the rule of law, the protection of human rights and judicial independence, and because of this, Georgia is quickly progressing on the path of European integration.