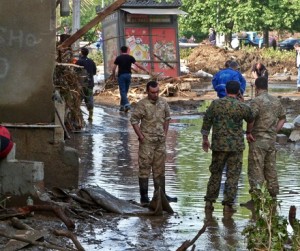 A report went out from Georgia's Agency for Emergency Situations that a river had broken out of its banks inside a city with more than a million inhabitants. Later the agency denied having said it. (Photo: Mari Nikuradze.)

TBILISI, DFWatch – As Georgia’s capital was drenched in rain water, and a stream flooded a district, killing five, reports went out from the national emergency agency that what caused the disaster was that the river Mtkvari had burst its banks.

Mtkvari is the largest river in the South Caucasus, carrying close to a hundred cubic meters of water per second. It would be a major natural disaster for it to break out of its banks in a city with more than a million inhabitants.

Associated Press is among many reliable news agencies which reported that the Agency for Emergency Situations in Georgia explained the five deaths with the river having spilled over its banks. AP’s story opened:

“A flood killed five people in Georgia’s capital overnight after torrential rain caused the local river to burst its banks, officials said Sunday. The Agency for Emergency Situations said that a mother with her two children, an elderly woman and an elderly man died in Tbilisi’s Ortachala neighborhood after the Kura River flooded Saturday night.”

The Washington Post carried the wire story under the headline: “5 people die after heavy rains cause river to burst banks in Georgian capital”. Also Interfax and Itar-Tass reported the river bursting as the cause of the disaster, as did local news.

But when DF Watch contacted the agency Tuesday, a spokesperson denied that that the disaster agency had told reporters anything of the kind.

“The agency has not released such information officially. And the agency never told the deaths was caused by swelled Mtkvari, but by damaged collector,” says a spokesperson at the agency’s press office.

During the day Sunday, people started to get a clearer picture of what had happened, and Tbilisi Mayor Gigi Ugulava and his deputy the Vice Mayor spoke about a water collector which had been blocked by a mud slide in a hill behind the affected area. Neither of them said anything about the river spilling over.

Locals in the affected neighborhood rejected the false media reports about the Mtkvari having caused it, and pointed out, as Mayor Ugulava, that the flood water came from a hill above the Ortachala district.

“They were reporting incorrect information yesterday. Mtkvari didn’t spilled. There is an artificial lake above the prisons, which broke out the beds and completely washed down everything.” Giorgi, 27 says, ‘I’ve later seen situation near ministries, terrible, that was a disaster and water completely drown cars.”

“That is nonsense. Mtkvari has nothing to do with what happened up there. Those buildings are under the hills. A large stream runs down from the hills above. Mtkvari is far from this place. Even if Mtkvari did spill over, it would not be possible for it to reach this place. Damage was caused by a large stream of water, which hit the houses. They say a water collector failed, I’m not an expert to prove anything but it’s obvious that Mtkvari has nothing to do with this,” another local resident says.

But even now, more than two days after, it is far from clear what really did cause the flood. Two distinctly different theories are being discussed as possible explanations.

The most affected district was Ortachala, which is surrounded by hills from behind and river Mtkvari on the other side. Residents of the district think that an artificial lake, located near the French ambassador’s residence, broke out of its beds and caused a massive stream of water down the hills and directly into toe residence area.

But another option, which is officially named and experts also consider most likely to happen is that there is a small water collector at this place in the hills, which is part of a water drainage system. It collects water from the hills, then leads it through tunnel into the Mtkvari. But it seems that collector hadn’t been cleaned for many years. The rain caused a mud slide, containing trees, which blocked the collector, changing the direction of the stream straight to the road and houses.

A powerful stream hit some small barracks in Ortachala killing four people, two women and two children. It flooded basements of houses, covered whole Gulua square with water and damaged territories of Interior Ministry’s former building, where whole number of cars were damaged, left overturned and dragged together creating hill. A prison was close to where the flood water came through, and a hundred soldiers could be seen working on cleaning it up, while preventing media from entering.

Locals describe that when the artificial lake was made, the ravine was divided into two parts. Part of it was directed to the new lake, the other part to the tunnel. The ravine is near the small village Shindisi. People there say that the stream blocked the tunnel with trees and other objects, which directed all the water to the lake. The lake is small, so the water broke out of it. Now the lake is full of trees and mud.

Gigi Ugulava, Mayor of Tbilisi said that recovering the losses in the capital will cost from two to three million lari.

“I spoke with the president too. A certain amount will be allocated from government. We also should appeal to city council to increase the reserve fund. It will cost about 2-3 million to do the necessary work,” he said at a special session of the Tbilisi local government on Tuesday.